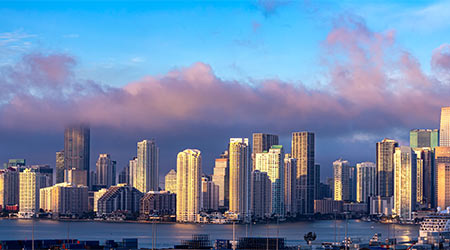 The saga between Miami janitors and the employers they feel are paying them much less than a fair wage continued this week, as workers clad in purple marched while raising one of the tools of their craft in frustration.

About two dozen janitors stomped in front of Miami’s tallest office building, raising signs and brooms in an effort to sweep away a wage issue that often has them earning less than $9 an hour in one of the nation’s costliest cities, reports WLRN.

The choice to protest in Miami’s downtown area was likely strategic. Many of the skyscrapers the disgruntled janitors walked by are cleaned by contracted cleaning companies. These companies, the janitors argue, pay some of the lowest wages of any profession in South Florida.

When compared to some other large U.S. cities — Chicago, Denver and Baltimore — janitors in Miami earn, on average, about $3 less an hour, according to a recent study from SEIU and University of California, Los Angeles.

This isn’t the first time a group of Miami janitors have marched through the city’s streets using props. Just last month, janitors mimicked the duct-taped banana art that was trending across the internet by duct-taping a banana to themselves. The janitors wanted to prove a point, as the duct-taped banana “art” sold for $120,000 — more than some of them earn from five years of work.