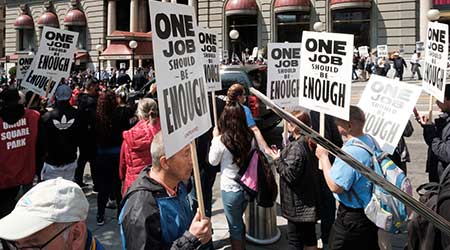 An epic standoff between commercial cleaning companies in the Washington, D.C. area and the janitors they employ has been called off after the two sides agreed to a new contract Tuesday, reports The Washington Post.

Tensions had been rising for a while between the businesses and the nearly 11,000 unionized janitorial workers who help fulfill their cleaning contracts with 1,200 office buildings in the Washington area. The janitors had marched through the capital’s rush-hour traffic twice in the past month to voice their demands, which included wage increases to offset the rising cost of living, more full-time work, and other benefits. One of those protests involved Washington, D.C. Mayor Muriel Bowser marching with the janitors through the streets.

The two sides left little time for an agreement, as the Service Employees International Union’s contract with the Washington Service Contractors Association was set to expire just a few hours after the deal was reached.