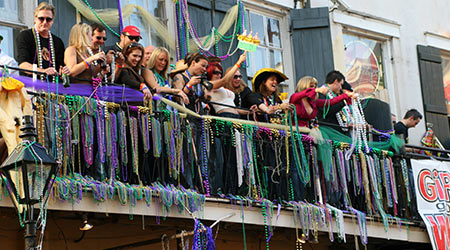 The New Orleans mayor's office is tallying the Mardi Gras debris volume at 950 tons so far, according to an article on The Times-Picayune website. Clean-up crews are working to dispose the huge amount of trash generated by the annual carnival celebration.

So far, 620 tons of debris have gone to the landfill, according to the director of the city's Department of Sanitation, Cynthia Sylvain-Lear. Last year, the tonnage hit the 1,300-ton mark. But there's still a long way to go to tallying this year's debris.

Sylvain-Lear said city crews have "maxed out" the available dump trucks and 48-foot trailers. More than 850 workers are on the job during peak clean-up periods.

The city also relies on hundreds of bead-blocking "gutter buddies" to largely keep Mardi Gras beads and other items out of storm drains. Emergency contract crews had harvested about 93,000 pounds of beads from catch basins late last year, so the city purchased around 250 filtering gutter buddies. City public works crews are picking up the gutter buddies and the bead filters are expected to return for next year's celebration.

In comparison,  the most recent New Year’s Eve celebration in Times Square, produced (along with revelers’ trash) 3,000 pounds of confetti — roughly 30 million pieces of colored paper dropped from seven different buildings. A total of 235 workers, 45 collection trucks, 60 backpack blowers and an army of street sweepers cleared the busy midtown intersection of more than 40 tons of debris by sunrise.