Cleaning Up One Of The World's Largest New Years Eve Events 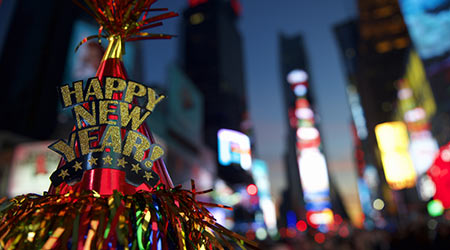 Since 1904, New York City's Times Square has played host to what has become one of the world's largest and most raucous New Years Eve parties. But once the ball drops and the people disperse, all that's left is trash as far as the eye can see.

According to reports from The Week, roughly 1 million people make their way to the iconic location in the early afternoon. They come with snacks and drinks to pass the time, but don't dare lose their spot to find a waste receptacle. Instead, much of the trash gets dumped underfoot.

At midnight, the 12,000-pound crystal ball drops, along with 3,000 pounds of confetti. According to 6sqft.com, that's roughly 30 million pieces of colored paper dropped from seven different buildings.

As The Week reports: "Cleaning up this mess is a logistical feat. This year, 235 workers, 45 collection trucks, 60 backpack blowers, as well as a veritable army of street sweepers, cleared the busy midtown intersection of more than 40 tons of debris by sunrise."

New York City sanitation workers traditionally spend an average of seven hours clearing the area after the festivities are over and the last party-goers leave.

For photos of some of the cleanup done over the years, visit The Week and 6sqft.com.