Janitors’ Union Speaks Out Against Sherwin-Williams 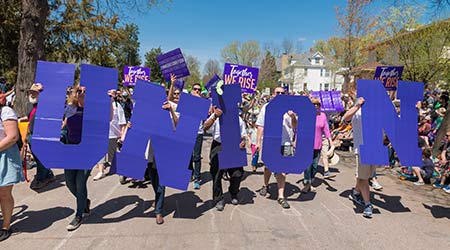 Service Employees International Union (SEIU) is arguing that Sherwin-Williams should not receive public funding for its new headquarters because it chose to replace its unionized janitors with non-union workers receiving lower wages, reports The Plain Dealer.

Service Employees International Union Local 1 says the paint manufacturer’s plans to fire nearly 30 of its headquarters’ janitors Jan. 31 in favor of non-union labor is a “civically irresponsible and morally wrong” move. SEIU says the janitors, who are contracted out by ABM Industries, are paid between $12 to $15 an hour — much less than the $9 to $10 an hour non-union janitors are typically paid.

Sherwin-Williams responded to the arguments in a statement to The Plain Dealer in which it claims the changes are occurring not due to wages, but because it believes ABM wasn’t doing a good job. The company says it doesn’t have a say in the janitors’ employment with ABM or the amount they are paid.

The impending change in janitors comes at a time when Sherwin-Williams is in talks with the City of Cleveland and Cuyahoga County, Ohio about potential incentives that would be paid out in exchange for the company building its headquarters and research and development facility in the city.

Wage issues have often drawn the ire of janitorial workers across the country. A strong example of this are the janitors of Miami, who continue to protest wages they believe do not align with South Florida’s high cost of living.