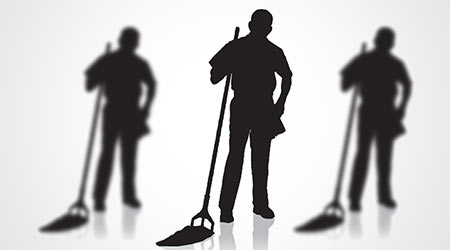 Following reports that described filthy conditions at 91 of 125 Chicago Public School schools, janitors are now saying that supervisors cheated to pass previous positive cleanliness audits. According to The Chicago Sun Times, janitors at two schools say their bosses tipped them off to upcoming audits — sometimes several days in advance — and instructed staffers on where to focus their efforts in order to pass the inspections.

The heads up allowed workers to skip other parts of the schools that wouldn’t face inspection. Extra help was also provided in the form of a “floater” custodian and additional cleaning supplies, according to the janitors that spoke to the Sun Times.

“They bring staff over to help,” Maxine Gladney said in the article. Gladney has cleaned Powell Elementary School in South Shore for six years. “That’s the only time you get supplies, everything you need, when they’re having a ‘blitz’ or an inspection.”

Maria Villegas, who cleans Sayre Language Academy Elementary on the Northwest Side, said she also has been told ahead of time when an inspector was coming.

“When there is an inspection coming, we leave some things that we [normally] do daily to clean the stairwells really well. [And we] clean the first couple of bathrooms because they’re going to check those. The [inspector] enters the first floor, checks the bathrooms, checks the stairwells, but doesn’t go to the upper floors,” Villegas said.