Influenza A Virus Could Soon Begin Picking Up 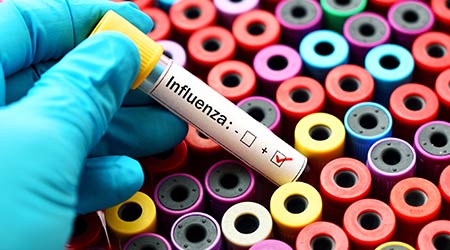 Influenza B has been the feel bad story of the 2019-2020 flu season, as the strain, which typically peaks in February or March, has gotten off to a fast start. However, that strain is expected to reach a peak soon, then start declining, according to a research partnership between the Biocomplexity Institute at the University of Virginia and AccuWeather. Unfortunately, the fall of Influenza B might be immediately followed by its nasty kin: Influenza A.

The presence of influenza A is slowly picking up across the United States, says Dr. Bryan Lewis, a professor at the University of Virginia, according to Accuweather. Lewis doesn't know for certain when the type A strain will begin surging, but he suspects that it will begin making its influence felt near late December.

Influenza B can be a menace, especially for kids; however, it tends to cause less hospitalizations and deaths than Influenza A.

Regardless of how Influenza A comes on, it's safe to say that the 2019-2020 flu season will be the third straight to display negative features. The 2017-2018 flu season featured recording-breaking hospitalizations and the 2018-2019 flu season was longer than average.