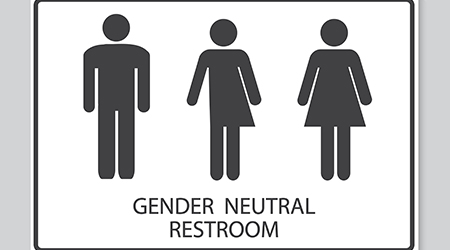 The Illinois House recently passed a bill that requires all single-occupancy public restrooms to be designated gender-neutral, according to WQAD reports.

The bill says that "every single-occupancy restroom in a place of public accommodation or public building shall be identified as all-gender and designated for use by no more than one person at a time or for family or assisted use." This includes all restrooms already built or that will be built in Illinois.

The new law would also require that every single-occupancy restroom have exterior signage that doesn't indicate a specific gender. The previous version of the bill required exterior signage indicating "all-gender" or "gender neutral."

The Illinois Senate passed the measure in April and the bill now goes to Gov. J.B. Pritzker for final signature. If the governor signs the bill, Illinois becomes the fourth state to establish gender-neutral restroom laws.

California, Vermont and New Mexico currently have similar restroom laws in effect, according to an article on the WIFR website.

CleanLink reports have tracked the gender neutral trend — which is primarily gaining ground in public buildings. However, these facilities are finding support in academic environments, too. For instance, the Bethesda Beat reported that the Montgomery County Public School system in Maryland is looking into establishing “all-gender” restrooms to increase privacy and discourage bullying.