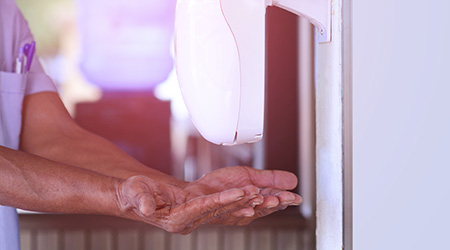 While a recent study has discovered that a hospital superbug is growing more tolerant to alcohol exposure, alcohol-based hand rubs are still saving lives, according to an article on the Inside Science website.

When it comes to preventing infection, alcohol-based hand rubs are still effective, according to experts, including the scientists who discovered the alcohol-tolerant bacteria. Even the superbug with the increased tolerance, vancomycin-resistant Enterococcus faecium, will die if the hand sanitizer is used correctly.

Didier Pittet, an epidemiologist at the University of Geneva Hospitals and Clinics in Switzerland, who has led the World Health Organization's hand hygiene initiative since 2005, said the study’s key message it to make sure you use enough alcohol for long enough to kill all the germs.

In the new study, researchers examined how E. faecium had been evolving in two Australian hospitals, comparing E. faecium cultures collected recently to ones that had been frozen for up to 19 years. Researchers treated the bacteria with a 23 percent alcohol solution — much less than is typically used in hand sanitizers.

Healthcare facilities will need to "adhere rigorously to hand-hygiene protocols," said Timothy Stinear, a coauthor of the study and a researcher at the University of Melbourne's Doherty Institute for Infection and Immunity, and probably institute additional measures to stop the spread, such as increased hand-washing with soap after coming into contact with the bacteria.