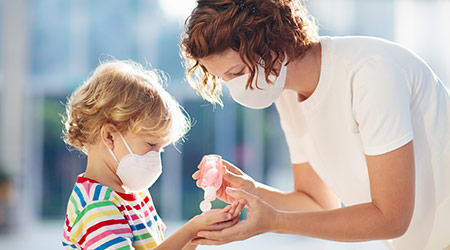 A Canadian woman is urging people to be aware of how hand sanitizer is sometimes being packaged to look like food and drink after she accidentally gave some to her grandson thinking it was a snack.

Cindy Zajac of Manitoba, Canada was babysitting her 18-month-old grandsons when she tried to retrieve a snack for the boy from a bag packed by his mother. She pulled out what she thought was a container of fruit puree, but later discovered it was hand sanitizer after the child's face turned red, reports Today.

Zajac says the boy's complexion changed  from the neck up soon after consumption and that he was feverishly trying to get what remained of the hand sanitizer out of his mouth.

A closer look beyond the colorful cartoons on the hand sanitizer shows the product is indeed a hand sanitizer containing 62 percent ethyl. It also warns consumers not to consume.

The boy began to slur and fell asleep soon after the consumption, so his grandmother called an ambulance. About a half hour later the boy was taken to a local children's hospital in a lethargic state, though he was awake.

The company that packaged the hand sanitizer, Ashtel Studios, has changed the packaging design so that it looks much more like a traditional bottle of hand sanitizer, reports Today.