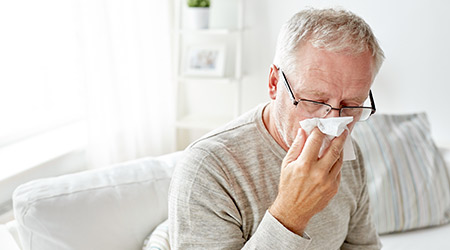 The spread of the Coronavirus might be getting all the headlines, but influenza continues to be serious threat, according to the most recent data released by the Centers For Disease Control And Prevention (CDC).

The CDC’s weekly influenza surveillance report came out on Friday and showed that flu activity continued to climb for the second straight week. Washington, D.C., Puerto Rico and 41 of the 50 states all displayed high influenza-like activity through Jan. 25. States from the Southwest to Southeast continue to be ravaged by the flu. In fact, Florida is the only state in these regions that didn't report the highest level of influenza-like illness activity for the week. Several states throughout the Midwest avoided peak level of activity, but reports of influenza-like illness in most of the region’s states remain on the higher end.

Influenza B viruses have been the story of the 2019-2020 flu season, having been reported much more often than usual. However, the CDC says the proportion of influenza A viruses compared to influenza B is increasing.

It was estimated that 19 million people have been impacted by the flu this season through Jan. 25, 10,000 of which died as a result. Nearly 70 children have suffered influenza-associated deaths.