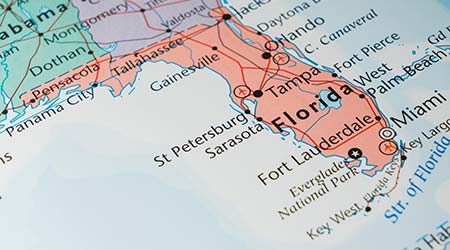 The poorly paid janitors and custodians of Florida will get a much needed pay bump, but they'll have to wait years for it to fully kick in.

John Morgan, an attorney based in Orlando, Florida who spent about $6 million out of pocket to get the measure on the November ballot, told the Miami Herald the minimum wage hike will take tens of thousands of Florida's citizens out of poverty. As a result, those individuals will have more money to spend, reasoned Morgan.

An increase to the minimum wage was opposed by some business groups. Mark Wilson, president and CEO of the Florida Chamber of Commerce said the amendment is harmful to local businesses struggling to succeed during the COVID-19 pandemic.

The Miami Herald reports that some question whether Republican lawmakers in the state will try to pass a bill that undermines the amendment.

Janitors and custodians in Florida have routinely protested the pay they receive, especially those working in South Florida. For example, about two dozen janitors marched in front of Miami's tallest office building earlier this year, requesting they receive higher wages.

When compared to other large U.S. cities like Chicago, Denver and Baltimore, janitors in Miami earn, on average, about $3 less per hour, according to a study from the University of California, Los Angeles and Service Employees International Union.