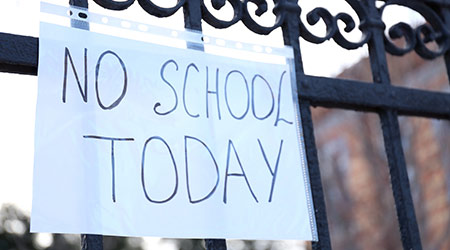 A large school district in western Colorado elected to close all of its 43 schools Thursday and Friday due to a meteoric rise in illnesses.

The decision to close Mesa County Valley School District, which is responsible for 22,082 students and 2,785 teachers and staff, was without precedent. Never before had the district shut down entirely due to illness, says Dr. Diana Sirko, superintendent of schools, in an announcement.

“We are taking this highly unusual action because this virus is extremely contagious and spreading quickly across our schools,” says Tanya Marvin, the district’s nursing coordinator. “In addition, it appears that there is now a second, related virus that is affecting students, some of whom have already been ill in recent weeks. The combination of the two has created an unprecedented spread of illness.”

The district didn’t give a name to the two types of viruses. However, the district did say that symptoms of both include vomiting and fever.

Flu season in the United States has certainly not yet reached its peak. The Centers For Disease Control And Prevention’s (CDC) latest “flu view” map of the United States (last updated Nov. 16) shows that only Mississippi is experiencing what is deemed to be the highest tier of flu activity. Louisiana previously received that designation, but the CDC’s flu data on the state is now labeled as “insufficient.” Texas, Missouri, Alabama, Georgia, Nevada and South Carolina have received the “high” flu activity designation.

Custodial staffs at schools across the country have the major responsibility of helping to slow the spread of the flu so students and faculty can remain healthy. But those who protect students and staff need protection, too. Here are some tips on how custodial staffs can be helped.