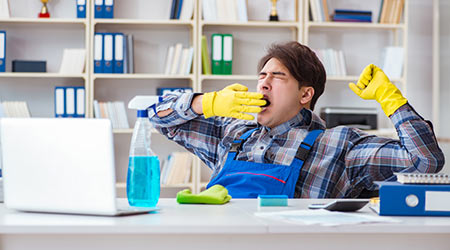 Two Canberra Hospital cleaners have been fired for falling asleep during an unpaid break at 4am, according to an article on The Canberra Times website. The workers fell asleep in the day surgery waiting area of an Australian hospital — behavior the cleaning contractor labeled a "serious breach" of the company's code of conduct.

As cleaning workers are expected to tackle more square footage in the same or less amount of time, occurrences like this become more common. Also, many cleaning jobs are secondary shift work positions and involve employees who are reporting to work already exhausted. (Click here to learn more about fatigue in the workplace and signs to watch for.)

While shift work can create potential productivity advantages, it also has many inherent risks. According to the National Sleep Foundation, some of the most serious and persistent problems shift workers face are frequent sleep disturbance and associated excessive sleepiness.

In the case of the Australian workers, after being contacted by The Canberra Times, the cleaning contractor reportedly told the two women it was reviewing their terminations.

The pair said they accidentally fell asleep on their unpaid breaks after working five or six hours without taking their paid break. They admitted to having received a warning about a year ago for sleeping at work, however this time they were on their break.

While union United Voice has maintained the women did nothing wrong by sleeping on their break, the workers wrote contrite letters of apology to the company begging to keep their jobs, but were still let go.