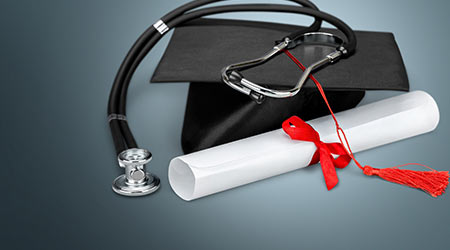 Starting any new job can be an exciting and memorable experience, but for Jaines Andrades, her first day as a nurse practitioner at Baystate Medical Center in Springfield, Massachusetts was not only the culmination of 5 years of grueling schoolwork and certification, but also a full-scale ascent from where she began professionally.

It was that very same facility in which Andrades previously worked as an EVS custodian — before embarking on a multi-step journey from registered nurse and then finally nurse practitioner, as reported by ABC News. Starting in her new position late September, Andrades commemorated the journey in a Facebook post, with a photo featuring three badges representing each stop along the way — one facility, three positions over a decade-long process.

Now specializing in the trauma surgery ward, Andrades has never lost sight of the importance of the EVS staff, as she details in an interview with “World News Tonight.”

"I learned as a custodian that every part of the hospital and every person who works in the hospital is important,” says Andrades.

While it certainly wasn’t an easy journey, Andrades hopes that her story an serve as inspiration to those looking to elevate their professional careers — and provide motivation to those currently taking a similar path.

"I hope that my story can inspire people who feel maybe discouraged by their past or where they come from," she says. "I just want to let them know, if I can do it, anyone can."

We can’t get enough of inspiring stories such as the one of Andrades. Last summer, we covered the similar journey of Frank Baez, now a nurse who graduated from New York University, the same school he used to clean. Read more on his story here.