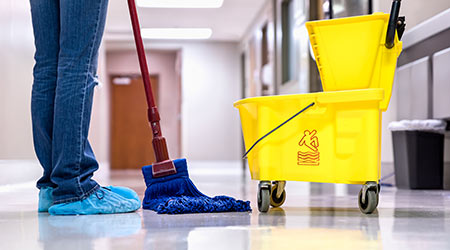 A school custodian in Alvin, Texas is an internet sensation after a photo of her comforting a saddened student with autism went viral.

The custodian, known to the students of Passmore Elementary as “Ms. Esther,” saw that the student was laying on the ground, struggling to cope with the bad day she was having, reports CBS News. It was at this point that the custodian chose to lay next to the student and pat her on the back as a demonstration of support.

“All schools should be so lucky to have their own Angel on campus,“ the child’s mother wrote in a Facebook post honoring the custodian.

Loving the moment captured in the photo, the Alvin Independent School District posted the image to its Facebook page with the text “Sometimes you just need to take a break!”

The photo, which was shared hundreds of time on Facebook, also received love from Autism Speaks. That post was shared more than 2,000 times.

The love students and school staff have for custodians is something to behold. While the great work of custodians isn’t always celebrated everyday, often enough stories will break regarding the fantastic bond students and custodians have with one another.