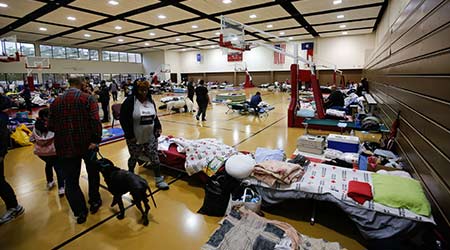 Cleanup crews in California are working to curb the spread of sickness with powerful chemical disinfectants as wildfire evacuee shelters are hit by viral outbreaks. According to reports from the Washington Post, cleaners regularly wipe down the the metal door handles and keep mops and buckets at the ready. The outbreak of vomiting and diarrhea has carried on for days at the Yuba-Sutter Fairgrounds in Yuba City.

Reports say that about one evacuee a day has to go to the hospital. At one point, four people were in isolation in a makeshift infirmary set up behind blue curtains on one side of the exhibit hall.

More than 120 people in shelters and other temporary accommodations have been taken to hospitals with stomach ailments that resemble the symptoms of norovirus, a highly contagious infection. Similar symptoms have been a problem at other shelters housing wildfire evacuees, according to earlier FoxNews reports.

Three weeks after the fire began, temporary accommodations are being overwhelmed by overcrowding and disease as tens of thousands of Californians are facing months without permanent housing.

Chris and Tanya Kennedy are on their second temporary home since the fire drove their family from their house in Paradise, the article said. They first fled with their 6- and 4-year-old children to a shelter in Oroville. But when the fire also threatened that facility, they moved to the fairgrounds, where they’re now threatened by illness.

Tanya Kennedy, a former housekeeper, said they are trying to keep safe with vigilant handwashing.

Another temporary shelter site, a Walmart parking lot in Chico, has begun to clear out amid forecasts of rain and rumors that services the retailer has been providing — including toilets and handwashing stations — will be pulled soon.