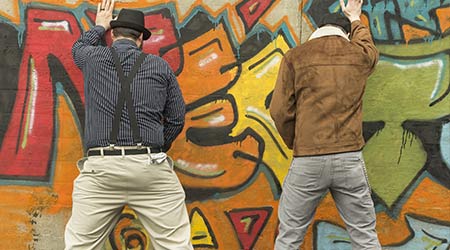 Tired of their friends and neighbors having to hold their bodily fluids for blocks at a time despite their body’s protests, Minneapolis Downtown Improvement (DID) District is encouraging restaurants, hotels, stores, and commercial offices to open their restrooms to the public.

Last week DID took to the Minneapolis’ most heavily-trafficked sidewalks and placed signs that indicated where the closest restroom is, reports The Star Tribune. The group hopes that it will eventually be able to help triple the number of toilets made available to the public in the city’s downtown from 29 to 100.

The difficulties Minneapolis residents face in finding public restrooms is not at all unique. All over the country citizens struggle to find a place to safely relieve themselves in cities. As a result, people end up defecating or urinating in public — something that has become a problem in Los Angeles.

This past June, Washington, D.C. began preparing to launch a public restroom pilot program that would lead to freestanding public restrooms being placed in spots where city officials say they are needed. The program is similar to those that have been started in San Francisco, Portland and New York.