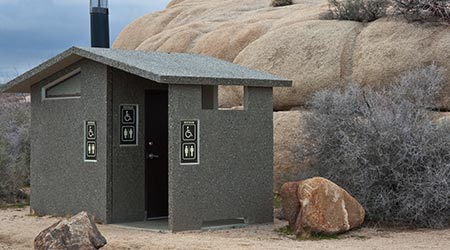 Unlike previous government shutdowns, the most recent has allowed some national parks to remain open to visitors. The decision is welcomed by travelers that were unable to change their plans after the December 22nd shutdown was announced, but the lack of a custodial staff after just eight days has been felt.

According to earlier reports, thousands of janitors were immediately impacted by the partial shutdown, which did include the National Parks Services. When announced that the parks would remain open — sans operational and cleaning services — many were skeptical of what custodial staffs would return to once called back to work.

Just days later, USAToday reported: "Human feces, overflowing garbage, illegal off-roading and other damaging behavior in fragile areas are beginning to overwhelm some of the West's iconic national parks as a partial government shutdown leaves the areas open to visitors but with little staff on duty."

In fact, the amount of trash and human waste is believed to have already hit record highs. Many park toilets have been closed or are already filled to overflowing. Unfortunately, without proper and available amenities, visitors are reportedly relieving themselves in nature, an act that could damage surroundings.

Meanwhile, trash bins have also reached capacity. This has resulted in excess littering throughout the parks, which can attract and hurt various wildlife found throughout the areas.

A representative from the National Parks Conservation Association expressed concern that, if something wasn't done soon, there might be significant damage to the national resources in the parks, and potentially to historic and cultural artifacts.

According to reports, some private companies have stepped in to lend a hand during the shutdown. Contractors that provide tours within the national parks are doing what they can to haul trash, replace toilet paper in open restrooms and groom trails for those visiting the parks — and they are footing the bill, too.

To read more about those pitching in to help at the parks, click here.