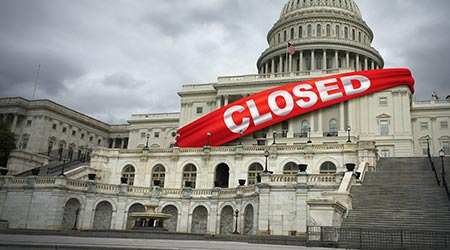 Not all federal buildings are impacted by the government shutdown, which began on December 22, but thousands of janitors, security guards and other service workers are expected to lose wages after funding ran out for a number of agencies.

According to Washington Post reports, President Trump warns that the partial shutdown "will last a very long time." Offices that have been impacted by the shutdown include, but are not limited to, the Commerce Department, the Department of Housing and Urban Development, NASA, the Transportation Department, Forest and National Park Services.

The result of these closures is expected to have a big impact on custodial workers, many of which live paycheck to paycheck and may be looking at additional work once operations open again.

Despite a federal shutdown, limited government openings will continue. For example, Ozark Radio News is reporting that the Ozark National Scenic Riverways in Van Buren, Missouri, will remain open. Park roads, lookouts, trails and campgrounds, as well as day use areas will be accessible to visitors. However, other than emergency and rescue services and law enforcement, operational services will be halted. Facility maintenance, restroom and shower access, as well as trash collection services will not occur — leaving a mess for returning staff once the shutdown is over.

In the meantime, furloughed cleaning workers have also had their pay suspended. According to Washington Post reports, most of the displaced government workers will eventually receive back-pay once offices reopen, but the majority of janitors will not be included in that compensation.

The reason for the interruption in pay — many of the cleaning workers are not employed by the government. Instead, they are staffed by a building service contractor that stopped providing services — and billing for those services — once offices closed. According to Business Insider reports, when the government stops doing business with these third-party companies, those companies stop paying their staff.

To compensate for these lost wages, many of the cleaners are seeking alternative work. Unfortunately, according to ABC News reports, this isn't an option for everyone. Some federal workers are deemed "essential employees" and are expected to report to work despite the closure. Essentially, they'll be working for free until Congress passes legislation.