A-Lister Weighs In On Gender-Neutral Bathrooms 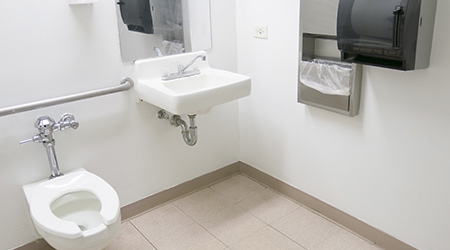 Gender-neutral bathrooms are becoming more common, and actor Julia Roberts recently weighed in on the issue by posting a photo of herself in front of a gender-neutral bathroom sign. According to InStyle, the photo’s caption said if Roberts could have her way, all restrooms would be gender neutral.

She encouraged her Instagram followers to learn more about a cause close to her heart: GLSEN, the Gay, Lesbian and Straight Education Network. When fans switched over to her Instagram Story, they found a second message.

"Hi everybody, I want to talk to you about an organization that I feel really strongly about, it's called GLSEN," Roberts wrote. "GLSEN makes schools safe for every student no matter your sexual orientation or gender identity."

Roberts is not alone in her support for gender-neutral facilities. KFOX14 reports that gender-neutral restrooms are being considered in New Mexico. And, according to the Bethesda Beat, the Montgomery County Public School system in Maryland is looking into establishing “all-gender” restrooms to increase privacy and discourage bullying.

At the same time, the Illinois State Senate is considering a bill to require single-occupancy restrooms throughout the state in schools and businesses with public accommodations to be gender-neutral, according to reports on the Illinois News Network website.