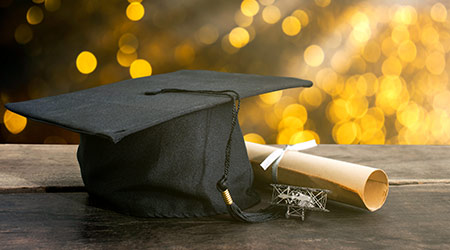 Herbert Perkinson worked as a truck driver for many years before retiring for that post in 2015 in favor of a custodial job with Woodland Middle School in Georgia. His endgame: Impress the school until it had no other choice but to award him the coveted position of head custodian.

In just a few years Parkinson’s hard work and abilities proved enough for him to be offered the job. However, there was one major issue: he didn’t have the high school diploma or GED needed for the position, reports the West Georgia Neighbor.

The school’s principal, Michael Blankenship, says he and others were hurt when they found out Perkinson’s lack of education prevented him from receiving the job he had otherwise earned. Blankenship then told Parkinson it was never too late to earn his GED. It wasn’t too long after the conversation that Parkinson started to hit the books.

In addition to his summer duties which involved landscaping and other custodial work, Parkinson began visiting the library with his daughter and grandson. There they studied up on high school mathematics, science, social studies, reading and writing.

Just before students returned to Woodland Middle School to learn, Parkinson closed his books and took the two tests for his GED. He passed both.

Keeping its end of the bargain, Woodland Middle School offered Parkinson the head custodian position for the 2020-2021 school year, and even refunded him what he paid to take the exams.

Parkinson’s decision to go and get his GED has already changed the life of another. His grandson had been debating dropping out of school before Parkinson got his GED. Now, Parkinson says, his grandson wants to go to college.

Parkinson isn't the only custodian in America who sought improved education in hopes of attaining a dream. Earlier this year it was reported that a former janitor for Denver Public Schools eventually returned to that same school system as a principal after earning a degree and gaining other work experience.