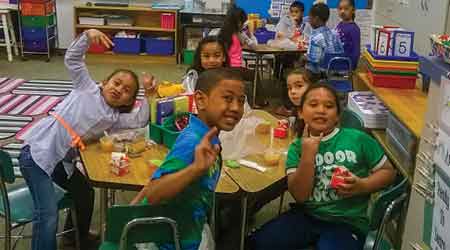 The Breakfast in the Classroom program has clear benefits, but it can also create struggles within schools. In fact, one of the most common complaints from teachers and custodians is milk spills in the classroom.

“Sometimes teachers won’t communicate there’s a spill, so it sits there all day and starts to smell or stain the carpet,” says Martinez.

To immediately address spills, teachers are given hydrogen peroxide cleaners in spray bottles and disposable rags. Custodial crews also have a portable carpet extractor in each school for cleaning up after breakfast. Every morning, Rhoten makes sure his carpet extractor is filled with fresh solution and ready to go.

“If there’s a spill, I have the teacher call me on my walkie-talkie as soon as it happens, so I can get to it before it settles into the carpet,” he says.

Some days, Rhoten receives as many as four calls; other days, none. But he rarely goes a full week without receiving at least one call. Milk spills are usually dealt with immediately, but fruit cup spills often go unnoticed.

“When that syrup hits the carpet, it’s invisible,” he says, “so you can’t tell there’s a spill until a kid’s tracked enough dirt through it to make it stick.”

To counteract the problem, teachers will often lend a hand and help children open the cups.

Carpet stains aren’t the only concern to introducing food to the classroom. With more crumbs and spills, Martinez was initially worried about the program’s impact on the schools’ integrated pest management program.

“We already have some pest problems in Title 1 schools,” he says.

At Washington Elementary School, Rhoten has noticed an increase in ants since the program started.

“During summer school, teachers would sometimes find old food in the desks, or crumbs on the floor that were missed,” he says. “Kids were also hiding food in their lockers to take home to siblings, so I’d find ants there.”

Fortunately, incidents such as these are the exception, not the rule, and most schools, including Backman, have not reported an increase in critters.