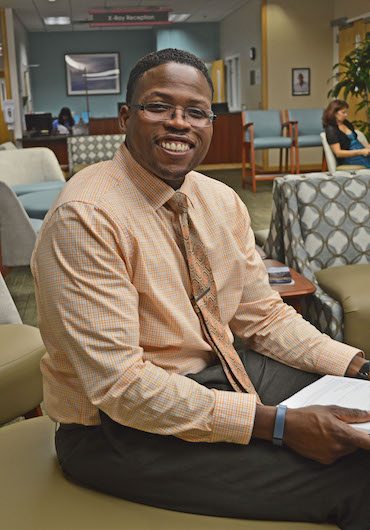 Jonathan Cooper leads by example, not from a desk. And he is certainly no stranger to getting his hands dirty. Having worked his way up through the ranks in custodial operations, Cooper uses his past frontline experiences to teach his crew at Orlando Health Central Hospital, Ocoee, Florida, to be the very best they can possibly be.

Shortly after starting at the hospital, Cooper developed an Environmental Services philosophy: “Provide exceptional service to every patient and their family, every day, every time, with the spirit of warmth, friendliness and personal pride.” It is a mantra that he passionately embraces.

“I love and am dedicated to that philosophy and to the hospital’s vision,” says Cooper. “I walk with it and train my team to walk with me.”

Two common goals bring the team together: patient care and satisfaction. Cooper makes it his team’s responsibility to guarantee every patient’s needs are met and they are more than satisfied with their care. It’s important to him that the goals extend to the family, as well.

“Jonathan is routinely going above and beyond for the patients, guests and the staff at the hospital,” says Michael Hassell, safety and protective services manager.

He cites an example of when a patient came in for a critical procedure and had a very large family in tow. The family lacked the funds for a hotel stay. And learning of this, Cooper and his team took it upon themselves to provide and set up sleeper chairs in the waiting area, complete with pillows and blankets.

“This is how we can expect Jonathan to act in his leadership capacity,” says Hassell.

His passion for helping patients and leading by example to create a safe and clean environment has paid off. Just over a year ago, the hospital started an eight-month stint as one of the top 10 hospitals in the country for patient satisfaction — and is trending to be ranked again.

In March, the department also received the most successful Joint Commission survey ever, and was dubbed by surveyors as “the cleanest hospital they’ve ever seen.”

“Sometimes you don’t think you are making an impact,” says Cooper. “But then you have a patient call to thank you, or you have a reason to give kudos to the staff — that’s when you know it is all worth it.”

Recognizing the staff and offering them advancement opportunities is something Cooper feels passionate about.

“The team really cares about the job they do and the families they serve, and they deserve recognition for their hard work,” he says. “We also offer potential for growth into leadership positions. Spending time with the team and offering areas for development and growth is what it’s all about as a manager.”

Cooper makes no bones about the fact that the members of his EVS team are his greatest asset. It is that attitude that Hassell says makes working with Cooper such a pleasure.

“He brings a spirit of camaraderie and teamwork to the department,” says Hassell. “It is a privilege to work alongside a fellow manager/director who so completely embodies the idea of going the extra mile and doing things right.”