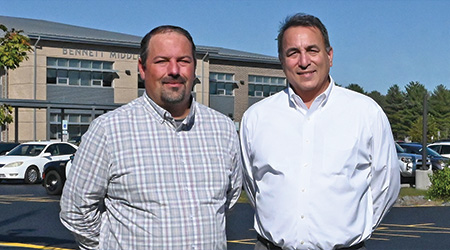 Back in 2018, when Chad Mackley jumped to the public sector after 22 years as a Walmart District LP Manager, the first goal that he set when taking over as operations manager for Wicomico County Public Schools was to modernize the cleaning processes — but he quickly realized that he'd never have all the answers on his own. The Maryland-based district comprises 31 buildings across 24 schools, each with specific cleaning needs. Mackley knew right away that establishing a common template for their maintenance would take intense preparation and due diligence.

The challenges were numerous, from the actual mops and buckets still being used on floors to the wide array of machinery implemented across different schools. Noting the inconsistencies, Mackley and his assistant mangers set out to increase the efficiency of cleaning tasks, while also streamlining the training process for in-house staff.

Part of the process took the form of delegation, which he did by assigning the three assistant operations managers — Don Johnson, Tony Killen and Toussaint James — to each of his three key components to revamping the district's system: cleaning supplies, cleaning equipment and programs/processes.

With the right team in place, the next step was to assess how much money was being spent on products and calculate how much time was being dedicated to different tasks.

"Why were we spending so much on hand soap, for example, when I got here?" asks Mackley. "You don't think it's a lot, but it adds up quickly. How do you re-allocate the budget so we can implement new processes without getting any additional funds from the county?"

Armed with all the information he needed on the current processes, Mackley and his operations team reached out to others in the industry for help. He set out to call every vendor in the area to see if they were capable of meeting the district's demands within a specified budget.

Working with a budget meant the district had to stand firm on what they were willing to spend when negotiating with vendors about upgrades on equipment or processes. Those negotiations took place in a conference room dubbed "The War Room" by Mackley, where each manager on the district's team would meet with vendors to specify precisely what their needs were, and even more importantly, what they were willing and able to invest.

Whether it's adopting floor machines or implementing a software management program to simplify workloading, Mackley says there are two key components to innovating while staying within a budget. The first is to be firm with demands. The second is the willingness to take a piecemeal approach and adjust the levels of investment for different schools based on the need.

"The biggest thing I learned when we started doing this is that nobody has a program that's not going to work," says Mackley. "When we were looking to implement a software management program, for example, we had a handful of companies that we were discussing terms with. We told them, 'Hey, this is what I'm looking for — get me at least within 98 percent of it. If the services compared to our budget aren't quite there, then tell me what percent we're at and how close we are.'"

Eventually, one company approached the district and said they were within the 95 to 96 percent range. The two parties met, were able to compromise and found a solution.

"Every vendor has their sell. They're all willing to beat their competitors on something," he adds.

For Mackley, it is absolutely crucial to establish trust on the front end, before making any significant investments. Part of gaining that trust, however, is allowing vendors to showcase their value and offer a glimpse into various efficiencies or cost savings that could be on the horizon. There's perhaps no better example of this from Mackley's two-and-a-half-year journey with Wicomico than the partnership he established with Acme Paper & Supply, a distributor located in Savage, Maryland.

next page of this article:
A Mutually Beneficial Distributor/District Partnership