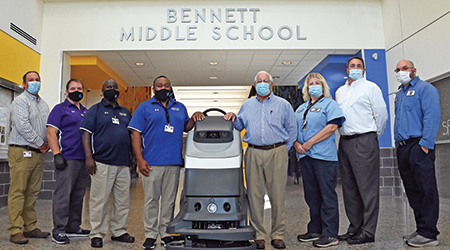 Of all the improvements that Mackley and his team was striving to implement in his first year, topping the list was both the condition of the floors around the district and, naturally, the money being spent to maintain them. The initial plan was to revamp the floors in one of the district's schools, but Phil Carrizales, director of the Facility and Hygiene Solutions Division at Acme, stepped in and offered to showcase an alternative solution with significant potential savings.

"He had received some quotes to re-hone the terrazzo floors, so I inspected them and said, 'Chad, give me a hallway. I think your floors are in perfect condition underneath here. Let me show you what we can do to save you some money and get you into a nice program,'" recalls Carrizales.

Knowing that the floors in that particular school hadn't been stripped in many years, Mackley was initially skeptical that simply applying one coat of floor sealer on the terrazzo floors instead of grinding them would suffice. However, the proposal from Carrizales came to fruition. After seeing the results on one hallway, the rest of the terrazzo floors were sealed — turning what was initially projected to be an expensive flooring project into a cost-effective alternative.

"As one of our larger schools in the district, it was right around 362,000 square feet in total — but you're only doing it every four years," says Mackley. "It's only one coat and still it's a quarter of the price — a 50 percent reduction cost in a year saved, just like that."

What started as one sealed hallway expanded to the whole school. The floor project was assigned to Assistant Operations Manager Killen, who developed a plan and a team, took the lead and completed the whole district. By giving Acme the opportunity to showcase both the method and the savings, a successful partnership of almost three years has blossomed.

Sealing the floors was just the tip of the iceberg, however. From there, Mackley's team began discussing other savings needs with Acme — notably the exorbitant annual chemical expenses for every school.

When Mackley first arrived at the district, the custodial staff across all facilities were using around 35 different chemicals throughout the course of their duties. Significant costs were being accrued not only from the simple purchase, but also the time required for staff to research and understand the particular needs these chemicals were meeting. It also hampered efficiency of the custodians, who frequently had to go out of their way to swap chemicals at the supply closets.

The custodial supply project was assigned to Johnson and James. They worked with several different vendors to find the best solution for the district and the custodial staff.

In response to these concerns, Carrizales was given the opportunity to present a 90-day chemical trial that prioritized the streamlining of product usage and cleaning procedures. A main component of the program included decreasing the overall number of chemicals in use, while the overarching goal pushed for a broad simplification of the day-to-day tasks.

Just 30 days into the 90-day trial, Mackley and his team had seen enough — he adopted the program across the entire district.

"For starters, we were able to cut down from using 35 chemicals to just four through SC Johnson, saving us a ton of time on both tasks and storage," says Mackley. "It also simplified the training for all 150 members of our custodial staff going forward, and got frontline staff more on board with long-term changes."

With the positive momentum that was generated by the trial program, additional upgrades were made to complement the newly streamlined processes, including new floor machines and microfiber clothes that are laundered in-house — saving another 40 percent in annual costs. As time went on, innovations through the Acme partnership continued, most notably through the elimination of mops altogether and the adoption of autonomous autoscrubbers over the summer of 2021.

"The district started with four Nilfisk autonomous scrubbers just to test the value over the summer, but now an additional 10 are scheduled to be ordered over the course of the school year," says Carrizales. "They're expensive, but the return on investment more than justifies the upfront cost."

While not everyone was initially welcoming to the changes, Mackley says that over time, his staff has come to embrace the innovations. The autoscrubbers in particular have been a big source of improved morale due to the ergonomic benefits.

"Once they started seeing the benefits of why we're doing different things, all that buy-in started to come around," he says. "We have fewer worker compensation claims, as well. If you're using a mop, you're using your shoulders, your wrists and you're tearing up your body. I want to work smarter, not harder."

While Acme isn't the only distributor/vendor partnership that Wicomico has built up since Mackley's arrival, it was certainly the first to make a significant impact. The partnership serves as a template for how the district now interacts with distributors — giving them the opportunity to showcase their value on a small scale and building the trust to boost efficiencies further.

"As a leader within our markets, it's critical to have someone with Phil's depth of knowledge assisting our clients," adds Steve Attman, co-CEO of Acme Paper & Supply. "The Wicomico County Schools cleaning program has drastically changed the efficiency of their staff and cleanliness of their schools, which became increasingly important during the COVID-19 pandemic."