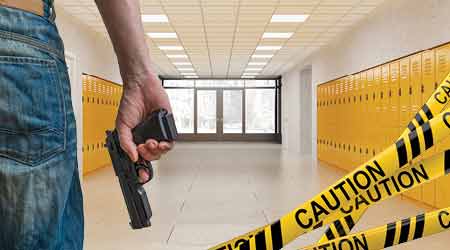 When it comes to imminent dangers, the most important provision is preparing staff to react quickly and calmly under pressure.

Having the necessary supplies is essential for any contingency plan, particularly those that cover natural disasters. But when it comes to imminent dangers, such as an active shooter or a bomb scare, the most important provision is preparing staff to react quickly and calmly under pressure.

“Education is best for those types of situations,” notes Spencer. “If there’s a shooter, we tell people not to be a hero. Take shelter, and make yourself scarce.”

“During a bomb drill, custodians check restrooms, foyers, cafeterias and storage areas, because they know what should be in these areas and what might look suspicious,” says Ames. “If there’s a lockdown, they’re responsible for checking the restrooms for kids. If they find any children, they’re responsible for taking them to the nearest room and locking them inside.”

Environmental services staff is put to the test during active shooter drills at Mercy St. John’s Hospital in Springfield, Missouri.

“We’re trained to shut and lock our doors if we can, then hide and be quiet,” says Doug Green, regional director of environmental services. “During training simulations, a ‘designated shooter’ walks through the building, and if they see you and give you a card, you’re dead.”

Roles are reversed for “Code Adam” or baby abduction drills: Instead of hiding, employees seek out the designated abductor.

“When they hear the description of the abductor [on the intercom], everyone moves into the hall and looks for that person,” says Green. “If they see them, they’re trained to follow them and call security.”

Practice drills at University of Washington in Seattle take the form of choreographed events that cover a wide range of catastrophic scenarios, from active shooters to people trapped in an elevator.

“These are intense, all-day exercises — and they can be chaotic,” admits Gene Woodard, director of building operations. “But the more you raise awareness of these events and talk about them on an ongoing basis, the better prepared you’ll be.”

Emergency protocols should also account for employees that may be quarantined or stranded on site for an extended period of time following a disaster.

Spencer was instrumental in writing State Farm’s pandemic plan, and — although the plan was not enacted — the company was on high alert during the most recent avian flu outbreak.

“We envisioned the worst-case scenario, and that’s what we made our provisions for,” says Spencer. State Farm coordinated with a food service company to provide pre-wrapped sandwiches if cafeteria provisions were depleted. The company also had plenty of potable water and clothing, as well as showers and areas where people could sleep in the building.

But those provisions alone won’t prevent the spread of the pandemic. Education is essential.

“As a facility manager, you can take care of the facility, but you can’t always take care of people,” says Spencer. “Sometimes people have to take care of themselves. So in our plan we include the process of educating employees about high-touch points and what to do during a pandemic, such as washing hands frequently and sneezing into your elbow.”

Purchasing supplies for workers who may be stranded on site can be costly. University of Washington recently invested $6,000 in three-day emergency rations and water for its custodial services team. According to Woodard, the university took into account a 14 to 15 percent absenteeism rate for its 290 custodians when calculating how many ounces of water each person would need. The rations, which are strategically scattered throughout campus, have a shelf life of five years.

“If we’re stranded here, more than likely, our family members are stranded at home, and we’ll be worried about them,” notes Woodard. “So we talk to our team members a lot about the communication plan in the event of an emergency and having a family member to contact outside the Seattle area, because chances are we won’t be able to communicate locally.”