This is the first part of a three-part article about robotics in the cleaning industry.

Visit Kapi’olani Medical Center in Honolulu on any given day and you’re likely to see three robots roaming the halls alongside the patients, staff and visitors. The machines are vacuums and automatic scrubbers that have minds of their own, cleaning the halls and public spaces without the labor of a human. Customized with graphics and effects that make them look and sound like a train, school bus and VW van, the robots have become part of the community. 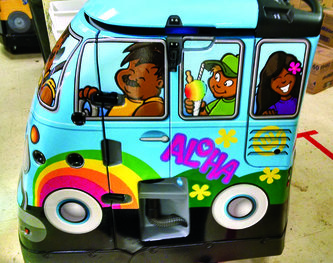 “They are known islandwide,” says Robert Crawford, general manager at Sodexo and building service contractor for Kapi’olani. “Anyone who’s been to Kapi’olani knows about the bots. You have kids and visitors leaning out the doors like they are waiting for the ice cream truck.”

Robotics are still relatively new in the jan/san industry, and Crawford says he dismissed the machines at first. He thought they were only suitable to wide-open warehouses that could be cleaned at night without staff or public around. After more research, however, he was swayed by the robots’ promised benefits and encouraged the hospital to spend about $120,000 on three TASKI Intellibot machines by Sealed Air Diversey Care.

“If you’re going to your financial people asking for $40,000 to buy a robot, you better have good justification,” he says.

Topping Crawford’s long list of justifications was improving public perception of cleanliness. This is an important consideration in an industry that’s highly dependent on scores from a series of patient surveys called CAHPS (Consumer Assessment of Healthcare Providers and Systems).

Hospital cleanliness is only one category of the CAHPS, but even small differences in a score can have large ramifications. It’s important that BSCs working in healthcare keep their portion of the CAHPS score high.

“It’s not always about cleanliness but about perception,” says Crawford. “We had to do something to demonstrate it was important to us. Having the public interacting with the robots draws attention to the fact that the floors are being cleaned. It helps us get patients engaged in the cleaning process.”

Patient scores on CAHPS are directly tied to reimbursements from Medicaid, Medicare and insurance companies. Bad scores can cost facilities millions of dollars a month. Even a small upward score change more than pays back the investment in robotic technology.

“The bigger driver for buying the machines was moving the scores,” says Crawford. “You need to keep them in the 90th percentile for maximum reimbursement. Before, they were in the 70s to 80s. Once the robots were introduced, the scores shoot up 5 to 10 percent and have sustained that. That’s money in the bank.”

next page of this article:
The Advantages of Robotic Cleaning