This is the first part of a four-part profile of Janitronics' President Jim Harris Jr. 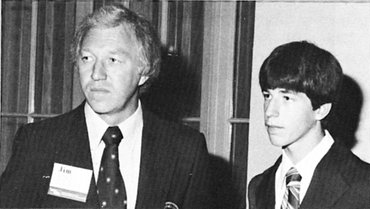 Sitting in an upscale Chinese bistro  in the Colonie Center shopping mall in Albany, New York, Jim Harris Jr. eyes a photograph I’ve slid over the table between the soy sauce and some unopened chopsticks.

“Oh,” says a surprised Jim Jr., president of Janitronics, Inc., based in Albany.

“Do you remember that?” I ask.

He stares at the photo some more. In it is a young Jim Jr. with a coat and tie and a shock of dark hair that could pass him off as member of The Beatles. He’s standing next to an important-looking man with a set jaw and a name badge pinned to his jacket lapel: Jim Harris Sr., his father and the founder of Janitronics.

Jim Sr. casts a long shadow. He was a well-known industry name, even in 1979, just seven years after he had started his cleaning company. He had already turned Janitronics into a success and was being recognized for it, plus he had been instrumental in founding the World Federation of Building Service Contractors.

“My dad was the keynote speaker that year,” says Jim Jr., “and I got to go to an international business conference on the janitorial industry, which really no one understood at the time — and they still don’t understand it. People have no idea the size and scope of it.”

But Jim Jr. does. He points to that moment in the photo as the time when he first realized the future he could create in the contract cleaning business.

That understanding — held by both Harris men, both formidable business minds — is what has allowed the company to expand to six locations across upstate and western New York and into Vermont. Along the way, Jim Sr. helped co-found The Maids, a network of more than 160 residential cleaning franchises (including one owned by Janitronics), and Jim Jr. helped grow it. Jim Sr. helped create the Cleaning Industry Research Institute (CIRI). Jim Sr. also created a cleaning consulting firm that has helped popularize the concept of team cleaning. And both men have been key members of the Building Service Contractors Association International (BSCAI) across five decades, with Jim Sr. serving as president in 1988 and Jim Jr. currently serving as treasurer.

But six branches and thousands of employees is not easily attained. There have been obstacles along the way — perhaps none greater than determining when a father and a founder should step down and when a son and a successor should step up. If that photo from Bern in 1979 marks the moment Jim Jr. began planning to join the family business, it was certainly not the moment Jim Sr. began planning to leave it.

“The farthest thing from my mind back then was giving it up,” says Jim Sr.

next page of this article:
Choosing The Cleaning Industry