Part two of this four-part article focuses on how the Harrises got their starts in the contract cleaning business. 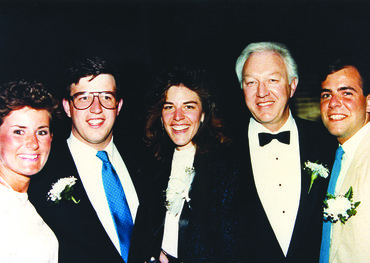 After quitting his job at a facility management company in Buffalo, New York, as a national sales and marketing director for the cleaning division, Jim Sr. struck out on his own to start a cleaning business.

He immediately went to the bank to get a $5,000 loan. When a banker told him he needed a business plan, he walked out to his car and wrote down on a yellow legal pad his expected sales figures, necessary expenses and his profit.

“The banker says, ‘Well, it’s not exactly a business plan.’ I said, ‘No, you know what it is, sir? It’s a customer. I already have this customer. Isn’t a business plan supposed to get you customers?’” says Jim Sr.

The banker cut him a check and Jim Sr. got to work.

As the company began to grow, Jim Sr.’s younger son, Jeff, worked summers for his father. Jim Jr., however, would leave from the family’s home in Clifton Park, New York, and head up to the White Mountains of New Hampshire to work in his uncle’s restaurant.

“I started as a bus boy,” says Jim Jr. “And by the time I was 17, I was the summer dining room manager. We had 280 seats and we were serving 400 to 450 people a night, and I was running nine or 10 waitresses, four bus boys and two bar tenders in a bar I couldn’t walk in because I was underage.”

Everything changed with the Bern trip, however. After graduating from high school, Jim Jr. left for Babson College in Babson Park, Massachusetts. The school is known for grooming entrepreneurs and the next generations of family businesses.

One day Jim Jr. told a professor about The Maids, which was just getting off the ground.

“He looked at it and he said to me, ‘If you don’t go into this business you’re crazy. ... It’s scalable with unlimited growth potential.’”

Jim Jr. graduated from Babson with a finance degree on a Saturday in 1984. He went to work for Janitronics’ The Maids division on that following Monday. But he wasn’t given any handouts. That first day, father told son, “If you don’t outperform the guy near or with you, you’re not staying here.”

Jim Sr. helped co-found The Maids along with his close friend Dan Bishop, another BSCAI stalwart. Janitronics’ own The Maids division, started in 1980, making it one of the first such franchises in the country. Jim Jr.’s brother, Jeff, eventually went to work for The Maids corporate headquarters in Omaha, Nebraska, before returning to Albany to work for his father’s The Maids franchise.

Jim Jr. started with The Maids in Albany as the company’s general manager. At the time, the company had 14 employees. Under his guidance that number rose to about 60 employees with two more offices by 1987.

Then in 1991 Jim Sr. asked his son to come work over at Janitronics as controller. By that time Janitronics had fallen on some hard times, and Jim Sr. needed some help.
“The whole enterprise was in serious trouble,” says Jim Jr. “It had just lost a customer that comprised 40 percent of its revenue.”

When asked why, he says it was a “bad customer.”

“Their objective was to put people out of business,” says Jim Jr. “We didn’t know it. We got too big with them.”

Never again. Jim Jr. set out to correct things. He negotiated 180-day terms with no finance charges with Janitronics’ key vendors, and Jim Sr. started hunting for new customers to diversify the company’s customer base. To this day, no Janitronics customer makes up more than 10 percent of the company’s business.

It took Jim Jr. about four years to stabilize things, and at the end of it he was made the company’s vice president. But his business mastery may not have been the only reason for the turnaround. Those years also coincided with Janitronics’ adoption of the team cleaning method.

Jim Sr. had become a team cleaning convert after getting to know Larry Shideler, founder of ProTeam, who had introduced the team cleaning concept to work in concert with ProTeam’s backpack vacuums.

The team cleaning system allowed Janitronics to improve production by 40 percent. But since no customers believed he could reduce his rates that much, he decided to increase his margins instead.

Pretty soon the company stopped referring to the system as team cleaning; it was simply the only system Janitronics used, says Director of Training Jeff Merrihew, who has been with the company for 25 years.