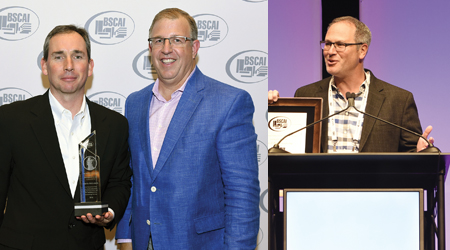 The BSCAI CLEAN Awards were presented at a breakfast ceremony during the association’s Contracting Success Conference in Las Vegas on Sept. 14. Awards presented in 2017 honor achievements in 2016. These prestigious awards are among the highest honors given by Building Service Contractors Association International (BSCAI). Winners for the tribute awards are determined by the BSCAI Awards committee.

“This year’s BSCAI CLEAN Awards continue the long-standing tradition of recognizing top performers and all-stars throughout the industry,” says Chase Carlson, co-chair of the CLEAN Awards committee. “The opportunity to pause, and both remember and recognize the significant achievements, creates synergy between the past, present and future of BSCAI.”

This annual award is named after BSCAI’s founder and first president, and is given in recognition of longtime service to the association and the building service contracting industry. The previous year’s BSCAI president is honored with the award. This year’s recipient is Paul Greenland, president of Aetna Integrated Services, Columbus, Ohio.

Growing up in the family business, Paul began working for Aetna in his early teens — washing company trucks, stripping and waxing floors, and cleaning post-construction projects. After graduating college, Paul returned to Aetna to run a company branch. He eventually took over for his father, Julian, more commonly known as “Jay,” in 2002 as company president.

Aetna joined BSCAI in the association’s inaugural year of 1965. The learning opportunities and friendships BSCAI provided over the years directly led to tremendous business growth for Aetna. In return, the Greenland family has been steadfast supporters of the association. Jay served as association president in 2001. When Paul himself received the presidential gavel in 2015, it marked the first time a father and son had both been president of the association.

“Paul is truly a leader in a league of his own,” says Carlson. “Scaling a successful family business and recently serving as president of BSCAI, Paul is a leader that energizes and motivates those around him to keep moving forward.”

During his presidency, Paul helped to bring the CBSE and RBSM training programs online and led the historical celebration of the association’s 50th anniversary. He also was instrumental in establishing a partnership with Contracting Profits, helping to create a new publication home for BSCAI Member News.

“It was a pleasure and honor to serve as president and see so many up-and-coming faces who will serve in this association,” said Paul upon receiving his award.

This award is named after the prominent former association executive vice president and is presented to a BSCAI member who has made outstanding contributions in furthering the programs and image of the association, and the building service contracting industry. This year’s winner is Curtis McLemore, CEO, McLemore Building Maintenance, Houston.

McLemore Building Maintenance has provided janitorial and related services for nearly 50 years. Curtis joined the company in 1993 and later became CEO in 2002. Company founder, and Curtis’ father, Don, served as BSCAI president in 1999. His role in the association, along with other early leaders, served as guiding principles for Curtis.

“I grew up in this industry and watched the pillars give back,” said Curtis upon receiving the award. “When it became my turn, I followed suit.”

Curtis dedicates his time to educating other building service contractors, and helping smaller and newer companies grow and thrive in the industry. In 2016, he presented two peer-to-peer education sessions at the Annual Convention. In 2017, he helped run the Bidding and Estimating Seminar and encouraged his staff to present a peer-to-peer session at the Contracting Success Conference.

“The McLemore family name has a long-standing history of outstanding service and it made perfect sense to award this year’s Walter L. Cook Award to Curtis,” says Carlson. “Reputation speaks for itself, and Curtis leads and serves by example.”