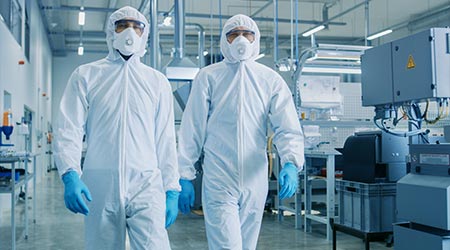 Contamination within the cleanroom setting can lead to a variety of problems that can stretch all the way into the hands of your consumers and even leave your company out of regulatory compliance. Being proactive and responsive to your environmental monitoring (EM) data can help head these problems off by assuring a consistent state of control.

It’s essential to establish precise standards for a cleaning routine and vital that your company — or service provider — respond quickly and effectively to any deviations from the norm or instances of contamination. EM data recording is sometimes required for industry-specific compliance, but without tracking and trending, it’s difficult to show that response procedures are effective.

In the cleanroom setting, one practice makes or breaks success more than any other: sanitation procedures. These procedures and standards must be spelled out clearly and followed to the letter. The supplement to that first practice is consistent measurement of microbes and particulate matter, setting alert limits, and drafting response plans to above-acceptable levels.

So, what is an EM trend and how should you determine a response? A trend is derived from data measured over time which demonstrates deviations and conformance to established limits. Basically, a trend is a tendency or drift from the norm, such as consecutive readings greater than alert limits or multiple recoveries of the same organism. Acceptable limits should be defined in the company EM policy.

Without thorough records of particulate levels, it isn’t possible to determine the source of contamination and prevent the same manner of contamination from happening again. Simply having records is not enough to prevent contamination, either.

Only the combination of proactive skilled cleaning methods, careful measurement of contaminant levels, along with creating response plans and measuring their success will suffice in keeping your critical environments clean and within acceptable levels.

Lane Williams is vice president of sales, technology and manufacturing at ABM.