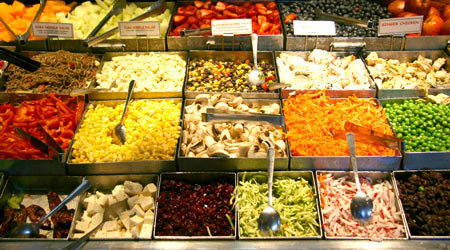 I eat at a buffet restaurant that was closed down a few years ago when three people died and several others were sickened due to salmonella and other pathogens being found in the fresh salads and vegetables. First of all, let me stress that I did not eat there until the restaurant reopened with a totally different process for food sanitization, staff training and rigorous safety protocols in place. It is now probably one of the cleanest facilities as far as food preparation in the area.

What led to the original illnesses was that workers were using the rest room and not properly washing their hands before returning to the food prep area. They also were trying to get extra use from their plastic gloves which were contaminated and reused. The last thing was that the management team tried to save food in containers that should have been cleaned/sterilized before use. As the workers handled clean food, it promptly became contaminated and eventually someone was going to get ill. Fortunately, the deaths and illnesses caused a thorough investigation of the process and now people are far safer from the possibility of contamination than before.

Although this is an unpleasant subject we need to be conscious of the possibility of cross contamination of our food at restaurants and complain/report any instances to the proper authorities. You can begin with the management of the restaurant but it probably would be better to contact the local health inspector and ask for a closer investigation if there is a grading system in place.

An exercise to conduct the next time you are at a restaurant is to observe a family with children at a table nearby. Many times a child (sometimes with evidence of being ill) will handle the salt/pepper shaker, catsup bottle or other items on the table. When they leave, make note of how the server cleans or fails to clean these touchable items before the next guests are seated. Just a thought.

Food safety is all our business.

Your comments and questions are important. I hope to hear from you soon. Until then, keep it clean...

Mickey Crowe has been involved in the industry for over 35 years. He is a trainer, speaker and consultant. You can reach Mickey at 678-314-2171 or CTCG50@comcast.net