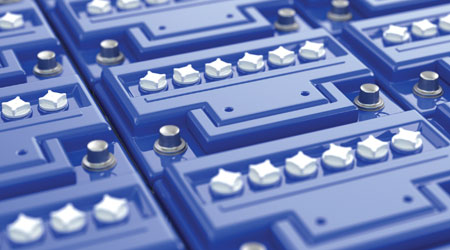 Batteries don’t always receive the consideration from end users that they deserve. They power crucial equipment, including large floor care machines, and allow janitors to work untethered for extended periods of time.

But these days, advancement in battery technology has created a whole host of options for end users. And with battery jargon running wild — sealed, flooded, VRLA, AGM, gel, TPPL — it’s hard for even discerning customers to keep up.

To make matters worse, misunderstanding battery types can lead to poor battery maintenance, which is a sure way to shorten the life cycle of a battery.

Most of the batteries used in the cleaning industry are lead acid batteries, which come in two types: flooded and sealed. Although much of today’s floor care equipment runs on flooded batteries, which are generally less expensive and have a longer cycle life, the jan/san industry is seeing growing interest in sealed batteries, also known as valve-regulated lead acid (VRLA) batteries.

“Flooded batteries are still the desired battery for most floor maintenance equipment,” says Fred Wehmeyer, senior vice president of engineering for U.S. Battery Manufacturing Co., Corona, California, “although there are a number of customers switching to sealed lead acid batteries, primarily because of maintenance issues.”

Flooded batteries require the addition of water, whereas sealed batteries do not, thereby making them “maintenance-free” — an attractive feature for some facilities.

“The electrochemical reaction in flooded and sealed batteries is the same,” says Stacy Delzeit, senior applications engineer for Trojan Battery, Santa Fe Springs, California. “Both use lead and sulfuric acid as the electrolyte. What’s different is flooded batteries use an additive to the lead called antimony, which causes the battery to gas and generate hydrogen. When those batteries gas they lose water, which is why you have to add water back to them. Valve-regulated batteries don’t have antimony; therefore, they don’t gas, so they don’t lose water. Because valve-regulated batteries don’t lose water, you never have to add water back to them, thereby taking maintenance out of the equation.”

“It boils down to what type of maintenance program you have in the facility,” says Wehmeyer. “There are also applications where maintenance could be difficult or impossible to do, so in those situations the sealed lead acid battery would be the preferred technology.”

But maintenance programs aren’t the only consideration when choosing between batteries. Some facilities mandate the use of sealed lead acid batteries for safety reasons.

“All batteries generate some amount of hydrogen gas when they’re charging, and hydrogen can be explosive in sufficient quantities, depending on the size of the room or container,” says Delzeit. “Flooded batteries generate a lot more hydrogen because of venting; batteries are open, so hydrogen gets into the atmosphere. You’re not going to have that hydrogen gassing concern with valve-regulated batteries, because they are sealed.”

The sealed battery has a one-way valve designed to release any excess pressure if the battery is overcharged. Unlike flooded batteries, a sealed battery will not spill acid when tipped on its side, allowing it to be mounted in different positions.

“Unless it’s operating upside down, a VRLA battery should never leak acid,” says Wehmeyer. “That’s a huge advantage for applications where you might be in an office environment or a food storage application, where you don’t want any chance of acid spillage.”

next page of this article:
Defining VRLA Batteries, AGM Batteries And TPPL Batteries