Vice President Of Impact Products Is A Soccer Star 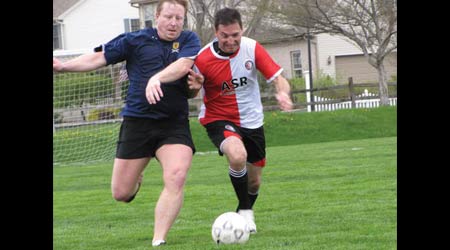 Chris Tricozzi, right, started playing organized soccer in his 30s and has continued into his mid-50s

There are four rules that Chris Tricozzi follows: 1. Be a good person and teammate. 2 Be committed. 3. Be willing to learn. 4. Have a desire to win.

If you know Chris, vice president of sales for Impact Products, Toledo, Ohio, you will not be surprised that he embraces these rules. But you might be surprised that the rules are more than good tenets to live by. They are also the club rules for the Toledo Area Soccer Association, a nonprofit soccer organization for adults that Chris founded with a group of other men.

Chris got his start in soccer 25 years ago, but not as a player.

“When my son Tony was five, he wanted to play in a YMCA soccer league. They needed volunteer coaches, so I raised my hand. Five-year-olds tend to run around in a big pack, so the coach’s job is primarily to coax them out of the bunch,” says Chris. “I was able to help coach him until he was about 12, when he got to a level for which he needed an actual coach.”

When Chris was in his 30s, he joined an adult league, but it didn’t go as planned. Chris and his teammates grew frustrated because they played to win, while others were less competitive.

“One night after a game, we were having a few beverages and talked about putting together a soccer league for adults,” says Chris. “We started sketching out some concepts on a bar napkin, and the Toledo Adult Soccer Association was born.”

The league is for men, women, mixed and open play. Chris, 56, plays with both the over 40s and over 50s age groups. The league is in action all year long, with games played indoors during cooler seasons and outdoors during the summer. Each game is split into two 35-minute halves and played on a shortened field. There are always eight players on the field for both teams.

“We have to remind people that it’s not the World Cup. The main thing is that you want to avoid injuries.” says Chris. “My team is called ‘The Internationals’ because we have people on our team from all over the world. I love the competitiveness, the camaraderie, and the friends I’ve made. And it’s a great way to exercise.”

Things came full circle for Chris when he got to play on the team with his son.

“We got to play together when Tony was home from college,” he says. “ I was old and slow, and he was young and fast, but the important thing is that we were on the same team.”