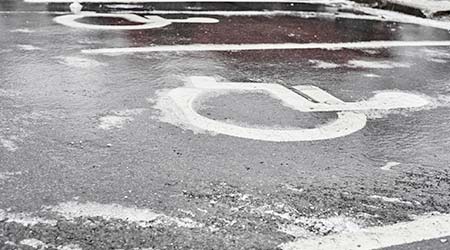 If 2020 was a pitch that just left the hand of some MLB team’s superstar closer, it would have been an otherworldly mix between a four-seam fastball and a nasty off-speed toss. Not only did things not go as planned, but the sick surprises came in remarkably quick succession. Like in many businesses, some in the cleaning industry looked downright silly when they took a swing at buying products in the middle of the pandemic.

Surprisingly, the tricks could continue for those buying ice melt for the first post-pandemic winter. That’s why manufacturers suggest distributors do all they can to both prepare for winter and help their end user customers avoid the mistakes they were making even before the pandemic.

The absolute worst time to be looking for ice melt is when the pavement is already snowy and icy. Despite this, jan/san distributors can seldom get their customers to even order ice melt until later in the fall, which starts off a sort of chain reaction because it compels distributors to often wait to order ice melt from manufacturers until August or September.

Nate Clemmer, CEO of SynaTek Solutions, Sounderton, Pennsylvania, says he has a hunch that end users typically do not want to order ice melt early because some part of them doesn’t want to accept that summer is nearing an end and winter is approaching. After Labor Day and around the time football season has started, that’s when he thinks people come to accept the truth.

Mentally prepared or not, lingering supply chain concerns and transportation issues will likely necessitate that everyone from ice melt manufacturers to facility managers and building service contractors start thinking about winter earlier than usual. Rick Jensen, vice president and chief operating officer at Morgro, Salt Lake City, expects that one of the biggest obstacles ice melt manufacturers will face this year are lead times. In his estimation, it will be hard to have a firm grasp on how shipping will play out, making plans for last minute shipments suspect.

“There’s been huge increases in pricing because of demand by railroads [for shipping],” he says. That’s tough for companies like Morgro, which uses railways to transport products sold east of Chicago.

In addition to lead times and pricing issues, Jensen says there very well could be a lack of drivers to transport the loads from manufacturer to customer.

To avoid expected logistical issues, the ice melt manufacturers we spoke to are encouraging customers to buy earlier. Many manufacturers offer discounts to those who buy early, so if jan/san distributors are willing to get out of their comfort zone a bit and order before they usually would, they stand to help themselves in more ways than one.

For example, SynaTek is planning on only giving pricing that’s good for 30 days at a time. After those 30 days, the cost of its ice melt will increase. Compass Minerals, in Overland, Kansas, is doing something similar.

“Due to high demand in Q1 2021 — which cleaned out inventory levels at customer locations, as well as continued logistical challenges — we are highly encouraging customers (jan/san distributors) to take advantage of our preseason, early order discounts and receive as much product as they can store going into the season,” says Jason Haskell, national sales manager, consumer and industrial at Compass Minerals. “We’re currently experiencing a shift in preseason ice melt order demand, with most customers moving their respective order related forecasts forward by one to two months.”

With ice melt in-stock at a more palatable price, distributors can work to ensure that their end user customers receive what they need early. At the very least, jan/san distributors should have the initial product handed off to their customers by late October or early November.

next page of this article:
Manufacturers Provide Ice Melt Guidance