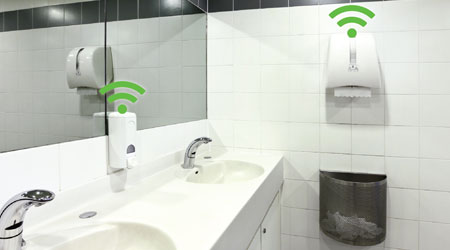 The future of smart restrooms has arrived, but jan/san distributors have so far been slow to embrace the technology, leaving behind a lucrative service offering that could skyrocket their value and relevance within the cleaning industry.

For the past several years, cleaning supply manufacturers have embarked on ambitious R&D initiatives to develop restroom devices connected to the Internet of Things, or IoT.

In the jan/san market, IoT-equipped soap and paper dispensers use smart sensors to monitor service life and consumable usage levels. The information is boosted over cellular networks to the cloud, where it is then deployed to janitors in the form of an SMS alert, allowing janitors to view restocking and refilling needs in real-time. The data collected from the devices allows distributors and end users to track usage trends over time, monitor foot traffic and even calculate ROI.

Now that the technology has been piloted, manufacturers are ramping up their efforts — and counting on distributors to help them commercialize their concepts in the field.

The emergence of smart restrooms has been a buzz topic within the cleaning industry for some time. But with cost barriers related to producing and purchasing the connected devices, network security concerns and jan/san distributors’ slow crawl to the frontline, it hasn’t caught fire the way other connected devices have. However, 2019 may serve as a tipping point.

“Last year, I think people were educating themselves [about smart restrooms],” says April Bertram, senior director of business development at GOJO Industries, Akron, Ohio. “This year people are implementing IoT solutions and paying. It’s going to accelerate over the next five years as most buildings will have smart capabilities to become more operationally efficient.”

While the jan/san industry may be in the early adoption stages of the technology, IoT as a concept isn’t new. A term first coined in 1999 by Kevin Ashton, the tech pioneer behind RFID and other sensors, the “Internet of Things” is defined as technology extending internet connectivity to physical devices beyond computers and mobile devices.

Fitness trackers are considered IoT devices, as are smart thermostats and app-controlled home lighting. In fact, research and advisory company Gartner forecasts that more than 14.2 billion connected “things” will be in use this year, a number analysts predict will only keep growing at exponential rates year-over-year.

Similar to other industries, the fuel to IoT’s growth in commercial cleaning lies less in its utility and convenience, and more in its ability to wield the power of data — and as analytics become more sophisticated, cleaning supply manufacturers say they are looking to their distributor partners to help them leverage industry insights and business intelligence.

“Think about the HVAC, lighting and chemical [industries],” says David Mowbray, general manager, Kimberly-Clark Professional, Roswell, Georgia. “They are all evolving with IoT devices. There is a lot of value to be delivered there. But the only way it can be delivered is if distributors are helping us deliver it to their end-use customers.”

next page of this article:
Smart Restrooms Keep Complaints Down