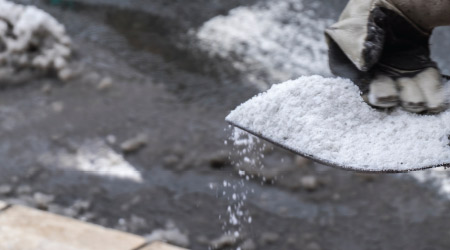 During the dog days of summer, freezing temperatures are likely the last thing on a person’s mind. The time to start preparing for winter weather, however, isn’t after the snow starts falling. These are the days to begin conversations with customers about their ice melt needs.

It’s not just hot weather that makes distributors delay selling ice melt. Many see it as a low-return product category not worth much time.

“People look at it like it’s just a commodity and they don’t make much money on it,” says Rick Jensen, vice president of operations at Morgro, Salt Lake City. “They think they just have to have it because end users need it. It’s so different than that. Positioned right, people make pretty good profit margins on ice melt.”

Those who learn how to properly sell ice melt can distinguish themselves in the marketplace.

“Having a great program that helps building managers and owners manage ice and snow during winter is a great way to build a business,” says Nate Clemmer, CEO of Secure Winter Products, a subsidiary of SynaTek Solutions, Souderton, Pennsylvania. “Most people aren’t looking for a new supplier, but if they have someone who keeps selling rock salt for every problem, this can be a way to get into the door that’s been shut.”

How does a business turn ice melt into a money maker? Manufacturers say the keys are understanding the various types and characteristics of ice melt, and tailoring sales to the specific needs of each customer.

Many people think all ice melt is the same, but there are actually many formulations. Sales reps must understand the differences if they want to sell the best solutions for their clients’ needs. The following is a descriptive list of several ice melt formulations:

SODIUM CHLORIDE — Also called rock salt, sodium chloride is a common ice melter because it’s the least expensive option. The downsides include limited effectiveness (it doesn’t melt ice when temperatures fall below 20 degrees), it can damage vegetation, and it leaves a white, powdery residue when it dries.

OTHER CHLORIDES — Commercial customers often choose calcium, magnesium or potassium chlorides over rock salt because they have two important advantages — they melt ice faster and work at colder temperatures (down to minus 5 degrees for magnesium, minus 13 degrees for potassium, and minus 59 degrees for calcium).
Although these options are less damaging than rock salt when used correctly, any chloride product can harm concrete and vegetation, and leave a chalky residue. They are also more expensive than rock salt.

MANUFACTURED — Like blends, manufactured products typically combine sodium with another chloride, and also include additional proprietary chemicals to improve performance.

NON-CHLORIDES — The final category of ice melt, non-chlorides, include no salt. As such, these products are safer for vegetation and pets, less corrosive to metals, and cause less damage to concrete. However, non-chloride ice melts are the most expensive option.

next page of this article:
Developing A Diversified Salt Portfolio