This is the second part of a four-part article about a partnership between the birthplace of college basketball and the founders of gym floor finish.

Geneva College has arguably the fullest basketball program in the United States. In 1892, the college welcomed Charlie O. Bemies as the school’s athletic director and football coach. Bemies was coming from Springfield, Massachusetts, where Dr. James Naismith had just invented the game of basketball (then called “basket football”) the year prior.

Bemies had fallen in love with basketball and introduced it to Geneva College, which coincidentally, was in the process of building a new gym — the 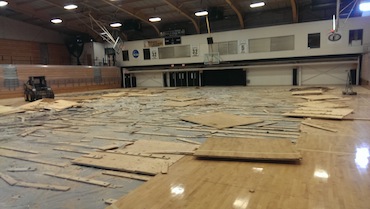 perfect home for its new team.

Geneva College has played competitive basketball continuously since the 1897 season and today is a member of the NCAA Division III.

Although the damaged gym floor isn’t the original historical hardwood, it’s still hallowed ground for Kiger and the school.

“Being an old basketball coach, I have a soft heart for gymnasiums and wood floors — it’s something I take a real liking to,” says Kiger.

Replacing the gym floor gave Geneva College the opportunity to pair its historic hardwood with the company that invented gym floor finish.

Twenty years after the first collegiate basketball game at Geneva College, N.S. Hillyard, the founder of Hillyard, became interested in basketball courtesy of his son, Marvin. In the early days of the sport, it was obvious to N.S. that improvements needed to be made to the gym floor. Players were routinely skidding and falling, getting skin burns or “strawberries” on their legs and arms.

N.S. began creating a floor finish that would make the game safer for athletes — and to test his products, he built a new plant and office building that included a gymnasium. The company even had its own team — The Shine-Alls — that competed on the court.

For nearly 100 years, Hillyard continued to improve its products to enhance the game of basketball. To showcase the company’s contribution to the sport, the main lobby of the Basketball Hall of Fame has been dedicated as a permanent exhibit of Hillyard’s accomplishments.

This was exactly the type of legacy that Geneva College wanted to pair with its own heritage.