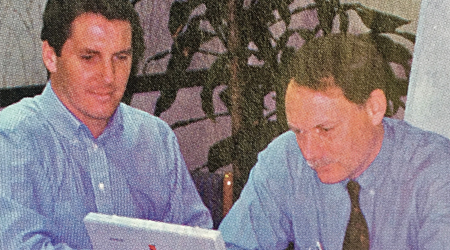 After waiting through dial-up speeds, internet users worldwide were eventually brought to the website they typed up and the fantastic information and entertainment it provided. This was the 1990s and the internet was opening up new worlds for consumers and businesses alike.

Ever apprehensive to be one of the first industries to take technological advancements on first, jan/san distributors had to be aggressive here. The sales and marketing advantages websites offered were grand and the ability to communicate through email was a game changer. There were also the giant online distribution sites — new competitors who looked to dominate the industry through the internet alone.

There was a boom of websites like JanCentral.com and MaintenanceMall.com that threatened to topple the traditional distributor. However, by the new millennium the dot.com bubble burst and many of these virtual distributors tanked. What was left was the same game-changing communication and information hub that would alter how the jan/san distributors operate forever.

“I can’t put it into words,” says Friedman. “I can go on for hours about how it took an industry that is hands on … to where the dissemination of information is instantaneous.”

Friedman isn’t the only person left in amazement. Henson went as far as to say the web presented the biggest change to the industry in the last 75 years.

To use the internet to its full advantage, a jan/san distributor needed to have a webpage where customers could go to look into, and eventually buy, products. Waxie was one of the early adopters of a company webpage in the industry, says Charles Wax. He recalls that jan/san distribution websites lacked the personal service and face-to-face interaction with the customer that was so common, but it allowed customers to price shop right away.

PB Gast and Sons was also proactive early on, churning out a “strong website,” says Gast. The dot.com boom and all of the competent websites it churned out forced PB Gast and Sons to put a lot of resources into it’s website, so that it was acceptable.

“Basically make it as easy to go to PB Gast as Amazon.com,” says Gast of the company’s web-presence vision.

Like in other industries, both business-to-business and business-to-consumer, the internet has changed the way a person goes about purchasing a product. People do much of their research of a product online, so the sales rep trying to move an item has to at least stay sharp on the product details, if not change the way he or she sells.

“At the end of the day, you’re probably not going to buy a very expensive automatic scrubber without looking at it online,” says Silverman.

Selling in the jan/san industry can be like selling cars now in that many of the people who are purchasing a vehicle know just about everything they need to about the automobile before they visit the dealer.

“In your selling process you’d be well advised to know what you’re talking about,” says Friedman. “That’s what you find today — the buyer gets it.”

The internet was not the only technology digitizing the distributor’s world. Bar-coding technology helped distributors make the manual picking process more efficient and more accurate.

“When we implemented bar-coding we were obviously hoping for improved efficiencies,” says Bart Cash, vice president of operations, Brame Speciality Company.  “The results exceeded our expectations.  Our inventory accuracy by specific location in the warehouse improved from 70 percent to our current 98 percent. It has allowed us to cycle count each day at a much quicker pace while being more accurate.”

Like the advent of bar-code scanning, another technology that has made daily business less laborious is enterprise resource planning (ERP) software.

Distributors used to send sales reps out with weekly inventory reports that he or she would update throughout that span by making calls to the office. But with smartphone and laptop ownership becoming more common, sales reps stood to benefit from a software they could download onto their device of choice so that they could have the most up-to-date status on product stock, price changes and delivery times while out in the field.