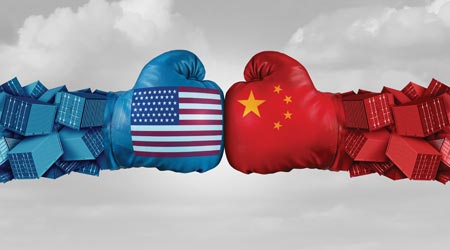 The United States and China continue to elevate the tariffs imposed on one another as part of their ongoing trade war. As each country remains retaliatory to what the other is doing, the jan/san industry is one of many being caught in the crosshairs. Recent tariffs the U.S. has imposed on goods from China could lead to declined sales, reduced revenue layoffs, and more, say industry experts.

The Office of The United States Trade Representative  (USTR) officially released Sept. 18 a list of roughly $200 billion worth of Chinese imports that it will subject to tariffs. An initial 10 percent tariff was placed on the items on Sept. 24 and will increase to 25 percent Jan. 1, 2019. The round of tariffs placed Sept. 24 are the third in a series the U.S. has imposed on China for what the USTR says is a “continuing response to China’s theft of American intellectual property and forced transfer of American technology.”

Since the study was completed prior to the United States Trade Representative’s Sept. 18 announcement, it’s possible the figures vary a bit, though McKinney says an increase of expenses of at least $1 billion should still be expected.

In part, John Dunham & Associates based its study on past data. The study found that more than $5 billion worth of the chemicals and polymers imported from China and Chinese territories in 2017 would have been subject to these tariffs had they been in place then, according to a report by Independent Chemical Information Service. Nearly 9 percent of the total imports of these particular products came from China that year.

The second round of tariffs could cause a price increase of $96.3 million for chemical distributors, the firm concluded in a separate study. The first round will not have an impact on the industry, says McKinney.

The impact the tariffs have on chemical distributors is sudden, as the tax is already applicable. The effects could begin soon thereafter for some. Once they do, the taxing could lead to an increase in price, which drops demand, which drops sales, which leads to job loss.

“Each individual company will be impacted differently depending whether or not they import from China,” says McKinney.

While a natural response might be to ditch the China-made products and look elsewhere, that’s not always an option.

“I think it could just be that some of these products are literally made nowhere else accept from China,” says McKinney.

Ultimately, McKinney believes the cost of the tariffs will be passed down to the customer. But the other results discussed could also come into play. Some companies will have to cut jobs. And those that don’t have to cut jobs will probably not have the capital to hire new employees. There’s also more extreme possibilities.

“We certainly have a few members that so much of their inventory is from China that it could put them out of business unless they shift their inventories to different market sectors,” says McKinney.

next page of this article:
ISSA Voices Concern