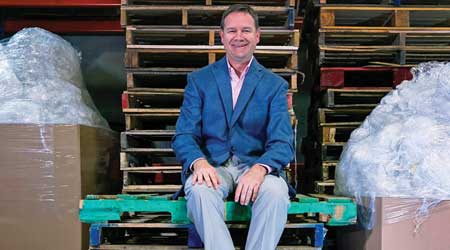 Iowa-Des Moines Supply practices what it preaches at both its Des Moines and Baker Supply & Paper warehouses, whose appearance could act as a sales pitch of sorts. At the Des Moines warehouse, for example, the eyes of visitors meet four-yard long dumpsters whose recycled content is emptied once a week.

“People walk into our warehouse and can’t believe what it looks like, it’s so clean,” says Doug Tharp, manager of Iowa-Des Moines’ warehouse in Des Moines.

When the recycling and waste diversion figures for the company are added up, Iowa-Des Moines Supply’s efforts become even more impressive. Just three years into the DEAL program, the Des Moines facility has a waste diversion rate of 67 percent, which is an impressive 17 percent better than the LEED standard.

“It’s pretty remarkable what all that adds up to over a year, the amount of cardboard and shrink film,” says Weidmaier.

And it’s not just cardboard and shrink film. Tharp says the facility recycles all office paper, wood waste and plastic. The only thing the facility doesn’t recycle is the trash from the break room and restrooms.

“It costs a little bit more money, but you feel better doing that than throwing more product in a landfill,” says Tharp.

Iowa-Des Moines Supply’s facilities are also luminaries when it comes to energy consumption. The Baker Paper & Supply warehouse in Cedar Rapids, Iowa, and the warehouse in Des Moines have achieved U.S. EPA ENERGY STAR scores of 82 and 90, respectively. U.S. EPA ENERGY STAR scores are part of a national database on energy consumption by distribution facility. The ranking shows that the Des Moines facility is performing better than 81 percent of its peers, while Baker beats out an even more impressive 89 percent.

Every dollar Iowa-Des Moines Supply is able to save is a dollar the company keeps, as there’s no underlining costs. This way of business is the way of the future, says Saucier, and it will do well to counter rising costs. She has been encountering some numbers that are hard to stomach. Electricity, gas, water and fuel costs have risen as much as 9 to 15 percent throughout the country. Iowa-Des Moines Supply has kept pace with the change, having reduced its energy consumption by 12 percent compared to its baseline year of 2015, says Saucier.

Considering the rise in fuel costs, DEAL has encouraged participating companies to get their truck and vehicle fleets to U.S. EPA SmartWay certification status and maintain that distinction.

The program helps companies to improve the sustainability of their supply chain by measuring, benchmarking and improving freight transportation efficiency, according to the EPA’s website.

Like it has with its waste diversion and energy consumption rate, Iowa-Des Moines Supply has successfully used DEAL’s suggestions to improve the fuel consumption of its delivery fleet — the average miles per gallon of the trucks has increased by 8 percent since 2015.

To improve fuel consumption, Iowa-Des Moines Supply opts to not buy its trucks, but instead lease so that they can take advantage of the increasingly fuel efficient vehicles that are built. Tharp says all the trucks in the company’s current fleet are five years old or younger and all fueled by diesel.

“The fact that Todd is making efforts to understand and rank his facility for fuel consumption shows he’s actively working toward reducing that,” says Saucier.

Iowa-Des Moines Supply might still have to sell sustainability and green products to customers, but employees are already sold, says Weidmaier. At the Baker warehouse, for example, employees are giddy about the LED lighting that was recently implemented because it makes it easier for them to see — a simple, yet meaningful upgrade.

Truck drivers are so interested in fuel economy, says Tharp, that they’ll often suggest to sales reps that delivery dates be organized so that the driving is as efficient as possible.

“Seeing the buy-in from employees and seeing them take ownership as a whole might be the most satisfying aspect of it all,” says Weidmaier.