Cleaning: Infection Control
When To Use A Cleaner, Sanitizer Or Disinfectant
BY Ronnie Garrett 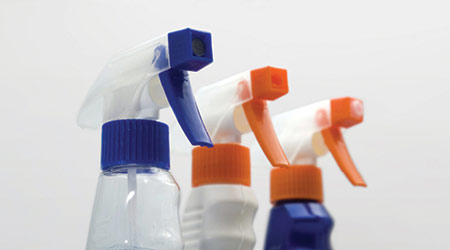 Cleaning is not sanitizing. Sanitizing is not disinfecting. Although the terms are often used synonymously, there is a significant difference among the three.

General cleaners remove dirt and debris from a surface and make things look shiny and clean. But they are not designed to remove the pathogens that can cause an illness. Sanitizers and disinfectants both reduce or remove the bacteria count on a surface, yet it is equally important to understand their differences as well.

Jan/san distributors can leave a lasting impression with their customers if they can help them better distinguish among these products, determine when each is applicable and know how to use them properly.

End users must fully understand the differences among cleaning, disinfecting and sanitizing to know which products to choose for which job. Bruce Heller, president of Cavalier Inc., Norfolk, Virginia, keeps this simple by referring to the dictionary, which he says offers easy-to-understand definitions for each:

• Cleaning removes a soil from a substrate. Thus, he says, a cleaner will mix with soil allowing it to be removed.
• Sanitizing is to have a substrate deemed hygienic (from a public health perspective), thus sanitizers reduce, not eliminate, the growth of bacteria.
• Disinfecting is killing germs and bacteria.

In all cases, a janitor should first apply a general-purpose cleaner.

These products, though they cannot make a kill claim, have an important role to play, because a surface should be clear of dirt and debris before disinfectant is applied, he says.

After the surface is properly cleaned, end users must then decide whether to sanitize or disinfect. Once again, the distinction is important.

Sanitizers reduce microorganisms on a surface to a level considered safe by public health standards. A disinfectant, on the other hand, kills nearly 100 percent of bacteria viruses and fungi on a surface.

The standard is lower for sanitizers, which must reduce microorganisms on a surface by 99.9 percent within 30 seconds. To qualify as a disinfectant, the U.S. Environmental Protection Agency (EPA) requires that the solution reduces the levels of pathogens by 99.999 percent in five to 10 minutes.

That difference may seem small, but remember that surfaces contain millions of pathogens, and, depending on the germ, only a few particles may be necessary to spread infection.

Darrel Hicks, an infection prevention consultant in St. Louis and author of “Infection Prevention for Dummies” likes to use this example:

The other important thing to consider is which particular viruses, molds, bacteria or fungi a disinfectant is effective against.

“[The EPA requires] manufacturers of disinfectants to list everything that they are claiming it kills on the label,” says Charles Moody, president of Solutex Inc. of Sterling, Virginia.

These kill claims are also put on separate efficacy sheets that Moody says distributors should share and discuss with customers so they are fully aware of how the product may be used.

He cautions, however, that these products are only effective if the instructions on the bottle are followed to the letter. A disinfectant may say it’s effective against Methicillin-resistant Staphylococcus aureus (MRSA), for example, but only on a precleaned surface and after a five-minute dwell time.

“You can’t just spray a disinfectant on a dirty surface, wipe it off a second later and think you’ve fully disinfected a surface,” says Moody. “You have to follow what the disinfectant label says to do to have true disinfection.”

next page of this article:
Only Sanitize, Disinfect High-touch Surfaces