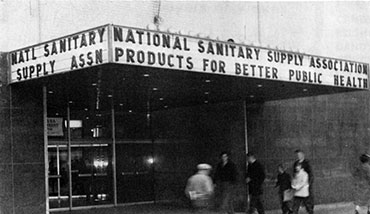 In the early 20th century, the janitorial supply industry was poised for growth. In addition to a rash of modern advancements pushing industry and innovation to new heights, there was a mounting interest in hygiene and its connection to the public health.

While those factors alone would seem to forecast success, there was one thing missing: a collective voice from the manufacturers and distributors who steered the sanitation trade. Instead, each shop was left to its own devices to figure out the best avenue for their business.

Without a cohesive voice to guide the business, jan/san was hardly an “industry” at all — just a few small supply businesses bandying against the local hardware, grocery and department stores to peddle soaps, disinfectants and brooms to the masses.

That all changed in 1923 when Alan Richter recognized the need for unified dialogue among the shop owners, no matter how small their entities may have been.

The St. Louis distributor called on six supply “jobbers” to meet in his hometown with the hopes of forming a trade association. Over two sweltering days in July, the men gathered inside a small room at the St. Louis Elk Club and “sweated it out from 8:30 in the morning until 6 p.m.,” conferring over everything from products and merchandising, to salary and salesman compensation.

“I realized there was a great deal I didn’t know about the business,” Richter would tell a convention audience years later. “I presumed that a conference of successful distributors, drawn from various metropolitan cities, would result in an exchange of ideas that would be beneficial to all.”

“The benefits derived from our small meeting led us to realize that greater benefits could be secured through the building of a truly national organization,” he added.

By the end of the conference, the National Sanitary Supply Association (NSSA) was born.

And there was one more man: Ed Kratsch, the editor of Brooms, Brushes & Mops, published by Milwaukee-based Trade Press Publishing Company.

Kratsch had been dispatched to St. Louis to report on the meeting by his publisher, Harry Apple. As the only media outlet present to cover the event, Brooms, Brushes & Mops would become the organization’s official publication.

“To launch an association it was important to develop the right kind of public relations and to secure publicity, which we were not in a position to buy,” Richter said in a 1948 Sanitary Maintenance article. “Harry Apple published Brooms, Brushes & Mops, the only trade paper at that time read by any considerable number of distributors. This publication was made the official organ of the association.”

The newly formed NSSA set a meeting the following year to adopt a constitution and to call a national convention, turning the small group of distributors into a fully-fledged trade association. Brooms, Brushes & Mops kept its readers informed of NSSA developments in the meantime.

Because the nascent organization was without funds, Kratsch would go on to serve as the association’s first secretary pro bono, his services donated by Apple. In 1930, Kratsch left BBM and stayed on with the association full-time until his untimely death in 1942.

With the association in desperate need of a secretary, NSSA President Marshall Magee urged Apple to fill the post. Though he initially hesitated, Apple agreed — again without compensation. When the association had enough funds in 1945 to hire an official secretary, Apple helped pick Leo Kelly as his replacement.

During this same time, Apple recognized the increasingly important role of sanitation, especially in army camps, hospitals and in the home. He shed BBM and in its place founded Sanitary Maintenance magazine, seeking to fill the gap in trade publications with a publication devoted exclusively to the interests of manufacturers and distributors of sanitary supplies and equipment.

“At long last I could see the opportunity to launch a new, strong trade paper in a field in which I had a deep interest and considerable knowledge,” Apple later recalled. “The publication which I envisioned would not be tied to the skirts of broom and brush manufacturers or be identified with soap manufacturers. The sanitary supply industry had now come of age and was entitled to a strong publication.”

In 1943, the NSSA launched an aggressive campaign to recruit new members using the columns in Sanitary Maintenance to deliver industry news and updates for more than 2,000 distributors across the country. The first issue of SM included information about the recent NSSA convention and status reports from both the association president and secretary.

“Anyone in the distribution of janitor supplies in the early days was on his own,” said Tom Opie, NSSA’s first president, in a 1967 letter. “The only way one could improve his knowledge was by traveling from city to city calling on different buildings, see what they were using and get their source of supply. These methods were not changed until our first trade journal appeared on the scene — thanks to Harry Apple.”

next page of this article:
SM/ISSA: The Partnership Evolves