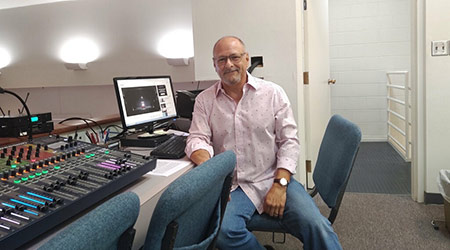 Sam Schneider, owner of SSE Equipment and Supply in Dothan, Alabama, volunteers his various musical talents to his church

Sam Schneider is one of the people who makes the "promise" of Christmas happen.

Sam, owner of SSE Equipment and Supply in Dothan, Alabama, volunteers at his church every Sunday, but not as a traditional Sunday morning volunteer. He is responsible for the lighting, lyrics (which are projected on screens so people can sing along), announcements, and general stage setup and breakdown.

One of the most special occasions of the year for Sam is his church's annual Promise of Christmas, which includes the collection of coats, socks, and underwear to people in need across Dothan.

"The evening itself includes a Christmas concert and an opportunity for people to get together," says Sam. "The Promise of Christmas is immensely successful for us. About 450 attend. It's a standing-room only event."

Sam got involved in the Promise of Christmas gig five years ago and is now the production manager for the event, which tasks him with supervising two teens working the production booth.

"They give me that title for that show to make me feel good," says Sam. "Most importantly, it's about being there and being part of a great event that supports people of Dothan who are in need."

The Promise of Christmas concert has been especially helpful to Dothan's citizens in recent years due to all the havoc Hurricane Michael caused the community last October.

"We have a large homeless population now, including a couple of homeless villages and a tent city in the woods, because of the damages inflicted by the hurricane," says Sam.

One of Sam's favorite things is to watch people from the technical booth before services start every Sunday.

"From the tech booth that is 50 feet higher than the rest of the church, I have quite a view from up in the air," says Sam. "It is amazing to see the altars covered in Promise of Christmas donations. There are so many donations that it takes a few days to sort and deliver the coats and other clothing."

Sam first started volunteering with the First United Methodist Church of Dothan because he loves performing music and found out his talents could help the church. "It's a blessing to be involved," says Sam. "It allows me to do something tangible and good for people."

What Sam really treasures are the interactions at Christmastime.

"People reach out to help each other. A lot of families are together who may not be together during any other time of the year," says Sam. "There's a real spirit of reunion in the air with the families, visitors, kids and people you otherwise don't get to see. It is truly the promise of Christmas."