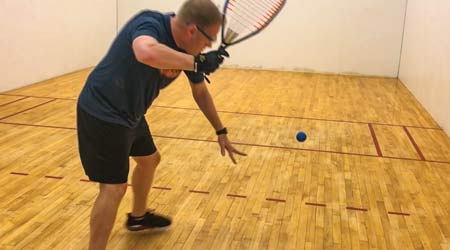 Michael Kauffman is serious about racquetball. The member development manager for Pro-Link Inc., Atlanta, is more than just a player. Michael gives lessons, helps with tournaments, and is even sponsored by a major racquetball equipment manufacturer.

Racquetball is a singles or doubles game played in a walled 20 x 40-foot court with short-handled rackets and a rubber ball. A racquetball player since the age of 10, Michael was competitive early on.

“When I was 14, my dad and I won the father-son championship in New York,” he says.

At age 16, Michael became the club pro at his local club and gave lessons on the side.

“I won a lot of tournaments, was ranked in New York, and then went to college in Maryland and didn’t play at all, except to take a racquetball class in college,” he says. “In my senior year, I decided to enter a tournament and won it. So I started playing the game again, entered the Maryland state games, and won in the finals.”

Some racquetball-related injuries sidelined Michael for a while. However, five years ago, he was ready to compete again.

“While at a health and racquet club on New Year’s Day in 2013, I was watching people play racquetball, got back into it, and have been playing ever since,” says Michael.

By that time, Michael was in Atlanta, which he says is a “hotbed” for racquetball.

“I met and competed against some really good players and managed to quickly get competitive again,” he says.

“I kept playing with a wrapped leg,” he says. “My teammate really carried the game. And we won the men’s doubles championship.”

Michael plays racquetball once a week, both at home and while on the road. An open-level racquetball player — “open” denotes that one is among the highest level of players, just one level below “pro” — Michael regularly plays with about 10 other open-level players — including one the top ranked women in the country.

Michael also volunteers for the Hope for a Cure Racquetball Charity Event, a tournament held every October in Atlanta to raise money for women with breast cancer.

“We help any way we can,” he says. “We referee the matches, get refreshments and basically serve as lackeys for the tournament players.”

Racquetball is a lifelong sport and Michael is living proof. He won’t be retiring anytime soon.

“Now that I’m 50, I’ll be playing in a new age group, which is a very competitive bracket because so many people started playing racquetball in the 1980s,” he says. “I remind myself to be prepared because there is always someone better than you are.”