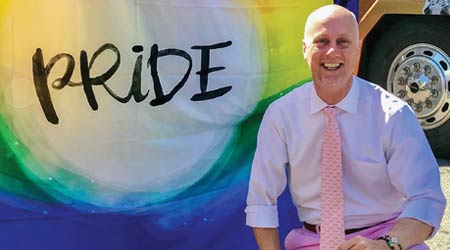 Peter Leahy is a guy who can finally say, “Everything about my life now is ‘easy’ — for lack of a better word.”

A senior customer marketing manager for Kimberly-Clark Professional in Atlanta, Peter says he “reinvented” himself in 2013 when he came out as a gay man.

“I was in my 40s, married for 20-plus years, and had two children. I decided to be true to myself and come out to my friends and family. And got a divorce,” says Peter. “There was not a particular event or milestone that triggered this. I guess I decided to not be afraid anymore. The universe was telling me to do something, and when I did, everything fell into place.”

Peter says coming out as gay after being “in the closet” for so long made him feel alone. He quickly realized he is one of many that have felt this way. After years of suffering in silence, Peter got involved in a gay fathers support group, Parents and Friends of Lesbians and Gays (PFLAG). He also joined Atlanta Pride Festival, which is held each June as part of Pride Month, a worldwide celebration of the LGBT community’s progress.

Peter’s involvement with these groups is extremely meaningful for him and for others.

“I found out that there were other ‘late bloomers’ like me. With their support and my new extended LGBT family, I became more confident in my identity and more comfortable in my skin,” he says. “ Essentially, my gay dad friends are my  ‘chosen family.’ We learn and support each other, and more importantly, celebrate the highs and lows of having children.”

Peter says he now mentors other gay fathers and provides them with the encouragement they need to be their true self.

“Five years ago I would never have believed that life for me would be better, less crazy and less fearful,”  he says.

When Peter wrote an article for the “Pride @ KC” company newsletter, about a dozen people from one of the other Kimberly-Clark offices made it a point to thank him.

Peter participates in fundraising efforts for the AIDS Walk Atlanta and 5K Run in September, and last year was very close to being the No. 1 fundraiser for that event. He’ll compete for that spot again this year, and will continue to organize a group of 50 or so people from work to participate as an organization in the walk/run.

For the past three years, Peter has marched in the Atlanta Pride Parade with the gay dads group. And this year, he will head to Augusta, Georgia, in June, to support the Kimberly-Clark group participating in the Pride Festival there.

”Today, people who have been in my life for a long time support me in ways I never expected,” says Peter. “The life I live and the relationship I have will be a non-issue 20 years from now. It will be part of the culture, versus an exception.”