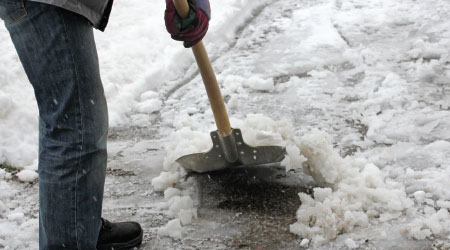 Facilities are concerned about their concrete, as well as landscaping from ice melt runoff. Residential apartment buildings want ice melt to be pet friendly. Fortunately, there are solutions to these issues that jan/san distributors can sell.

One thing is for sure: customers have options. Long gone are the days where rock salt was the only choice. Today, a simple Google search of “ice melt” elicits results ranging in quantities, prices, capabilities, deficiencies and chemistries.

The chemistry, or lack thereof, is often what determines the safety and effectiveness of ice melt. For example, chloride options are very effective, but they do have some downsides, too.

Nate Clemmer, CEO of Secure Winter Products, Souderton, Pennsylvania, has no problem calling calcium chloride an ingredient of a good ice melt. In fact, he says it’s great and one of the best at doing the job quickly because it gets really hot, really fast. It is also very affordable. But it’s that same heat that burns through ice that can cause issues in some settings.

“If your hand was wet and you touched calcium chloride, you'd know it very quickly,” says Dan Pannell, Ph.D., one of the lead scientists for Compass Minerals, Overland Park, Kansas.

For properties where animals are permitted, the use of calcium chloride might be a concern.

“We don’t want that heat trapped into their paws,” says Clemmer.

The trouble with paws is why end users who are especially concerned with harm to animals should avoid anything that’s granular — because it gets stuck. It’s also more likely to be ingested.

Just like certain ice melts might need to be avoided on a property that has a lot of animal traffic, managers dealing with property that has plenty of vegetation may also want to think about what ice melt they use.

Calcium chloride is a nemesis of plants because their high chloride content harms soil biology and dehydrates. This is an issue for other chloride-based ice melts such as sodium chloride, which is commonly referred to as rock salt.

“A winter’s worth of salt will end up in a snowbank, so when it melts in early spring, the runoff is like a salt bath to vegetation all at once,” says Clemmer.

Metal really cowers to chloride, too — especially liquid chloride. If ice melts continuously run against metals on a property — think aluminum door jams — they will be destroyed. So while a chloride-laden ice melt might save money on the front end, it might not make as much financial sense if these metal objects need to be replaced. To keep things cheap both now and in the future, distributors can train those using ice melt featuring chloride to apply it in an accurate manner that avoids door jams.

End users should also be trained on proper use of ice melts when working in areas where runoff could be an issue. Those ice melts that include chlorides can have a similar impact as turning fresh water into salt water, which has the potential to significantly impair freshwater fish and plants.

While non-chloride ice melts might help preserve property and nature, there are drawbacks that end users should consider. For example, calcium magnesium acetate ice melt is a “greener” option, but it can be more expensive and less effective than some other options, like sodium chloride. Potassium acetate meets a customer’s desire for a good melter because it is effective at eliminating the ice, but will probably reach into their wallet more than they would like.

next page of this article:
Tracking And Other Ice Melt Issues