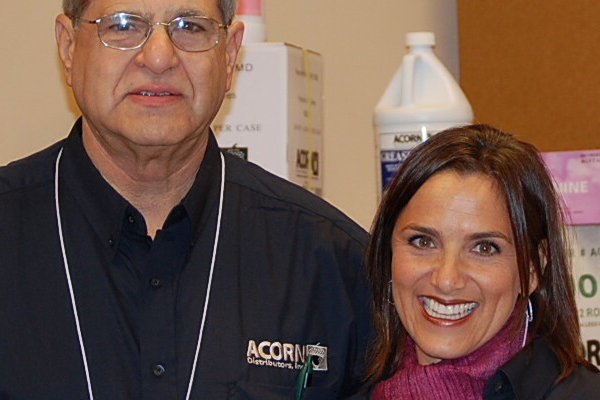 
Succession planning is a difficult endeavor for any company owner. Therefore, it’s often procrastinated and avoided. Not only does succession planning have the capacity to cause a business to fail, but if not done properly, it can also tear apart the family who owns the business. But if passing down the torch to the next in line is well thought out and planned, business should keep functioning without any major hiccups.

In the case of Indianapolis-based Acorn Distributors Inc., succession planning has been top-of-mind since Al Wachter became sole owner of the company in 1999. After convincing his daughter, Jennifer Rosenberg, to come back home and work for him, he’s made it a goal to pass down the knowledge and know-how of running the business. But Rosenberg didn’t start out right away in management. She worked her way up through the ranks with the company starting as a salesperson until she officially took over as president in 2005, when she purchased 52 percent of Acorn.

Today, Rosenberg runs Acorn with the values instilled in her from her father and has crafted her own management style along the way. Putting her employees first and creating a positive, fun work environment, she is setting her distributorship up for success for many years. And who’s to say she won’t pass down the family business to one of her two children.

A: It was in 2005, when I officially transitioned but I’m learning every day from him. We always bounce ideas off of each other and we make a really good team. My dad is still very involved in the business. I still can certainly go to him for questions. In the beginning, employees would go to him and he would bounce all of these ideas off of me and once the official buyout took place, employees now come to me and I keep him in the loop on the decisions. I like to keep him in the loop just out of respect and the fact that he’s still in the business. This is his bread and butter.

Q: Was it ever in the plans that you would take over the family business?

A: Not growing up in the business at all, I had no idea what I wanted to do. I went to college in Cincinnati and I worked in Columbus, Ohio, and I worked for a different company for five years. [My dad] was in the middle of buying his partner out and he told me when he started that process, ‘I’m fighting for this company, do you think you’d come and take it over some day?’ I was 25 at the time and I couldn’t make a commitment then. And so I said, ‘You know, we’ll see what happens once you get the company.’ He called me in April 1999 and he said, ‘it’s over, I got it and it’s time for you to come back.’ I hesitated at first but I ended up making the decision to come back to Indianapolis in August of 1999.

I started from the ground up. I started in sales, had very few customers and I had to work my way up and earn the respect of the employees. I never wanted to be treated different just because who I was related to. And that’s always been very important to me. It’s definitely been a bouncy road, but it’s been a good learning experience and it has been a good bonding experience for the both of us as well.

Q: What advice can you give another distributor that is looking to pass off a family business to the next generation? Anything in particular that should be addressed to make for a smooth transition?

A: I think with my father for instance who started a business, and he’s first generation, I think it’s very difficult because this is their baby and they have to pass it along. It’s not like they’re losing control, but they have to. There has to be succession planning in place because you don’t want to be in a situation one day where you never had those things in place and then something very traumatic happens, then what do you do.

It’s very important that you plan for the future. Not only for the future of the company, but for the future of the employees. I mean, I commend my dad for giving me advice from our corporate accounts and our corporate attorneys who have experience helping companies put succession plans together. He was very proactive and open to doing this. It wasn’t one of those things where I had to go to him and say, ‘OK, this is the time to do it.’ It was more the two of us sitting down saying, ‘OK, lets figure out a way to do this, making sure he and I are on the same page, and after that we both want to do this, this is the plan that we have, now lets get the professional advise so that we do it the right way.’

There are all kinds of horror stories out there you hear about family businesses…it’s a little bit easier for us because there’s only two members of the family involved.

Q: Can you tell me about your new program that’s boosting morale and promoting healthy living?

A: HR recently put together a weight loss program and anyone interested in it could sign up. We took the list of people and submitted that information to our insurance agency and they put people on teams. We have corporate here in Indianapolis and we have another office in Columbus, Ohio. So what’s been really fun is that there are people on the same team that work out of separate locations that don’t even know each other. And we had a weigh-in and every two weeks people weigh in and at the end of every 60 days, the team who has lost the most weight gets to go out for a healthy meal with myself and my dad. And it’s been a great morale booster.

There are really creative e-mails going out on what people should be eating over the weekend and who should be exercising and what you should be doing. The people have named the teams, they’ve come up with logos. People are really getting into it. So instead of having Hershey kisses laying around we have baskets of fruit.