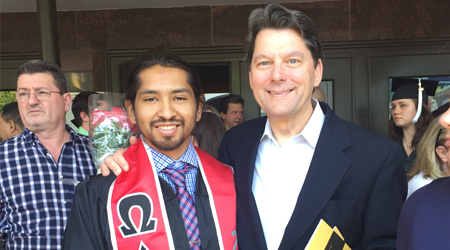 This 75th anniversary issue of Sanitary Maintenance is the perfect time to write about and celebrate Bob Wisniewski and what he does in his free time.

Bob, the retired CEO and, until recently, owner of Trade Press Media Group, which publishes this magazine, has quietly been a mentor, friend and “a proud father figure” to Jon Morales since the fall of 2000. The two met through a mentoring program at a Catholic school for Hispanic boys in Milwaukee’s inner city.

“A colleague suggested that I participate in the school’s mentoring program. I was paired with Jon when he was 14 years old and about to enter high school,” says Bob. “We still hang out together, 18 years later.”

Although it’s been a success, Bob did have reservations at the beginning.

“I really didn’t know what I could offer, but decided to say ‘yes’ and got involved,” he says. “I took my role very seriously. I wanted to make a positive impact.”

His philosophy was always to “be present” with Jon.

“That was the way I felt I could gain trust. I attended school events and parent-teacher conferences,” says Bob. “We shared a lot of meals, remembered his birthday, and invited him to our home.”

Bob may technically be the mentor, but his wife Rebecca has also been very supportive of the relationship.

“She’s been like a mom to Jon and he loves her dearly,” says Bob.

As with any relationship, there have been moments when a little “tough love” was needed over the years.

“Even though I was there to help and guide Jon, there were times we needed to sit down and have heart-to-heart conversations,” says Bob.

Ultimately, Jon was the first kid in his family to graduate from high school and college, and now he works with high school youth.

From graduations to a kidney transplant to a driver’s license test (during which Jon backed Bob’s car into a mailbox, and had to take the test again), Bob and Rebecca have been there for Jon through lots of big milestones, including Jon’s U.S. citizenship journey. This long and, at times, difficult process involved meeting with Homeland Security, hiring an immigration attorney and clearing other obstacles.

“Becoming a citizen was very important to Jon. Even though his mother, stepfather and sisters moved back to Mexico, Jon wanted to stay here,” says Bob. “He feels that America is his home. Rebecca and I were there for Jon’s citizenship ceremony and it was a wonderful occasion.”

After nearly 20 years of mentorship, it hasn’t just been a benefit for Jon — the relationship has had a lasting effect on Bob, as well.

“I was living in the suburbs in a bit of a bubble. Being with a young inner city man who was surrounded by violence and gangs opened my eyes to his challenges,” says Bob. “Being a mentor and friend to Jon has softened my heart and made me a more compassionate person.”